The king tide is a seasonal high tide that usually occurs between Oct. 4 to Oct. 10 and again between Oct. 17 to Oct. 21. A third and usually largest tide rises around Nov. 5.

The roadway in Fort Lauderdale, as of 4 p.m. Thursday, was a lot drier, but the tides weren’t over yet.

Neighborhoods were flooded from the rain and the king tides during high tide.

Some Hollywood residents said they deal with flooding every year, but the rain this week has made it much worse.

“Once a year, always around about October, so we kind of expect it, but with the rain it’s been a lot worse,” said Hollywood resident Monica Tevez.

Tevez said there were several inches of water in the road Thursday morning, coming into her driveway, and it didn’t recede until 4 p.m. “It actually reminded us a lot about Irma from last time because it was that bad this morning,” said Tevez.

The rising tide has also caused some minor power problems. “Somehow the flooding, it just trips the breaker for the flood light,” said Tevez.

Over in Dania Beach, a woman driving to work never made it and called a towing company to help her out near A1A. 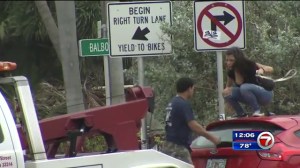 “She called me, the car’s stuck, she couldn’t move, and that happened,” said the woman’s mother, Elizabeth Citcioglu.

She got some extra attention from the tow truck driver who didn’t just make sure that her car was towed away safely but that she got out of her car dry. “We try to do the best we can, you know?” said the tow truck driver Andre Tate. “See somebody stuck like that, we try to get them out. Don’t want them in the car. It’s dangerous.”

In Miami Beach, the heavy rain and the high tides made the commute a difficult one.

“Because of the water levels, our pot thing over there filled up with water,” said Miami Beach resident Carlos Herrero.

“The good news is we have an excess of 40 temporary pumps out around the city,” said Eric Carpenter, City of Miami Public Works Director.

Even with the pumps, the roadways along 83rd Street and Crespi Boulevard were filled with water. The flood water got into electrical wiring in the area.

The City of Miami and Miami Beach both warned residents to beware of the king tides.

“We’re gonna see some tidal flooding over the next couple of days, rainfall on top of that and these heavy east winds are really piling the water up in Biscayne Bay,” Carpenter said.

While the flood waters can recede relatively quickly, they can still cause damage to nearby buildings and cars that drive quickly through the water, so it is recommended that motorists proceed with caution while in a flooded area.

“With a little bit of debris left from Hurricane Irma, you may not see things that are under the water,” Carpenter said. “Try not to drive through standing water if you see it and take your time. Be patient out there.”