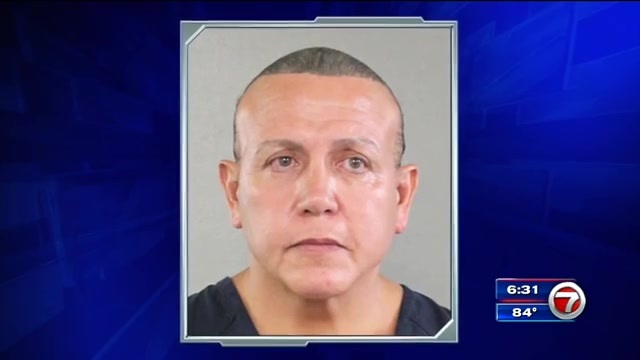 Sayoc’s hallucinatory world, pieced together by The Associated Press from the digital residue of his now-disabled Twitter accounts, gives a hint of the toxic news diet of the Florida man who stands accused of mailing pipe bombs to more than a dozen of the United States’ most prominent left-leaning public figures. But Sayoc’s stew of animal gore and partisan hate does more than provide insight into the man arrested in his van in Plantation on Friday. It also gives a taste of how conspiracy theories are finding an increased salience in American public sphere — and a sometime-eager purveyor in the White House.

“They are more prominent in our political discourse,” said Joseph Uscinski, the co-author of “American Conspiracy Theories,” who explained that President Donald Trump won the Republican nomination in 2016 in part by bringing “conspiracy-minded Republicans” to the polling booths.

Trump has since disavowed one of his trademark conspiracies — the lie that Barak Obama was born in Kenya — but he continues to cling to others, including the false claims that he saw thousands of New Jersey Muslims celebrating the Sept. 11 attacks on television and that millions of undocumented immigrants voted for his opponent, Hillary Clinton.

“You have to dance with the person who takes you to the prom,” said Uscinski. “He has to keep motivating these people, keep speaking their language.”

It’s a language that can easily tip into paranoia and violent threats, Sayoc’s posts suggest.

His Twitter feeds included references to bogus allegations that passenger aircraft were spraying the atmosphere with brain-altering poisons and that Clinton indulged in child sacrifice. One particularly off-the-wall story claimed that German Chancellor Angela Merkel was created in a Soviet experiment to resurrect Hitler using a secret stash of the Nazi dictator’s sperm.

The feeds also featured gruesome photos of pythons choking on oversize prey, headless goats oozing blood and a video of a giant alligator seen waddling across a Florida golf course. Sayoc seemed fixated on people who’d gone missing in the Everglades, posting often about reports that humans had been swallowed by snakes or crocodiles along with oblique threats to progressives that they would meet a similar fate. A frequent target for his rage were the high school shooting survivors from Parkland, Florida, some of whom became targets of right-wing hate when they began lobbying for gun control earlier this year.

Sayoc was also obsessed with George Soros, the Jewish investor who long served as a boogeyman for neo-Nazis and anti-Semites around the world and has, in the past couple of years, served as a Republican punching bag too. At one point, Sayoc painted the 88-year-old as a literal child-eating fiend. In more than 40 different posts, he accused him of paying Parkland shooting survivor David Hogg to help fake the massacre.

Minus some of the weirder posts and occasionally incomprehensible grammar, Sayoc’s online rages weren’t so far removed from the social media angst of the commander in chief.

The Soros obsession mirrors the preoccupations of Trump himself, who recently accused the Hungarian-born investor of financing anti-Trump protests and chuckled as supporters called for the Holocaust survivor to be thrown in prison.

Sayoc also rated Fox News’ conspiracy-happy Sean Hannity as one of his favorite hosts, just like the president, and railed against occasionally independent-minded Republicans such as Lindsey Graham, John McCain and Jeff Flake, just like the president. Like Trump, Sayoc despised CNN, posting a photo montage on July 2 that appeared to threaten its New York headquarters with an inferno. And also like Trump, who exults in degrading his opponents with mean nicknames, Sayoc came up with his own pet vocabulary for the targets of his ire, calling them “slime,” ”con job,” ”phony” or “fraud” in repetitive screeds.

“Elizabeth Warren fake Phony, Fraud lies con job,” was one such message, directed at the Massachusetts senator in a dig at her claim to Native American ancestry.

“We have her birth record and factual facts,” Sayoc said of the senator, who happens to also be a favorite target of Trump’s rants. “She has low cheek bones. She is a criminal.”

Trump, who often sources his claims to anonymous people or to what “a lot of people are saying,” has in turn accused the media of making up stories about him and his partisans, a theme he returned to only hours after Sayoc was brought into custody.

“We have seen an effort by the media in recent hours to use the sinister actions of one individual to score political points against me and the Republican Party,” Trump told supporters at a rally in North Carolina on Friday.

But it was Trump who talked politics as the explosives made their way through the nation’s mail system. Critics said Trump boosted conspiracy theories floated by his media allies that the devices weren’t real when he put the word “bomb” in quotation marks. Trump also complained that the incidents were blunting his party’s momentum ahead of the midterm elections next month.

Adam Enders, who has studied conspiracy theory at the University of Louisville, Kentucky, said there was no evidence Republicans were any more conspiratorial than Democrats — a point also made by Uscinski. But Enders did say that the promotion of paranoid thinking by Trump and others at the highest levels of the Republican establishment might have a hardening effect on those already ensconced in conspiracy theories.

“The people that are already there, or close to being there, it legitimizes those ideas,” he said.