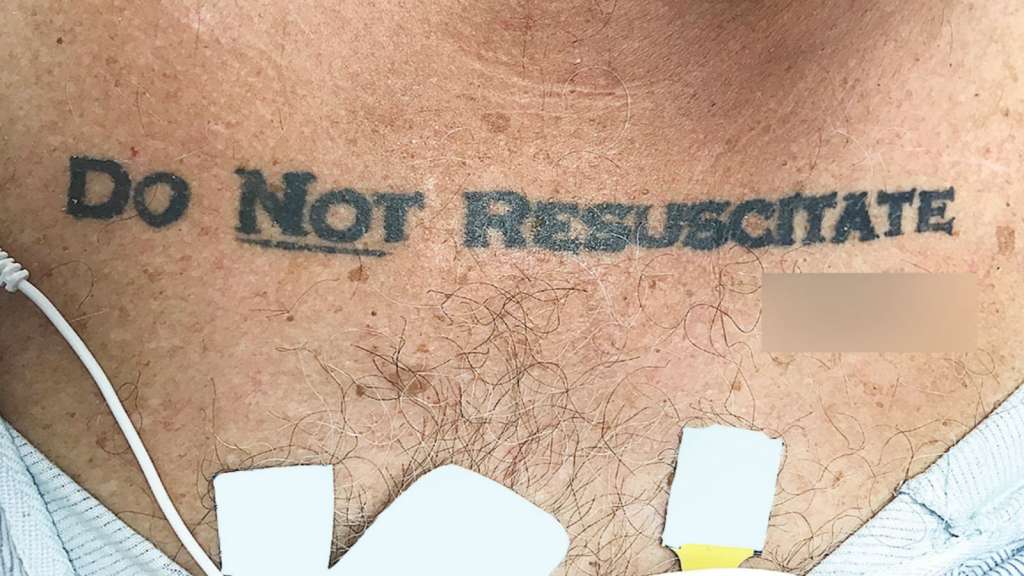 (CNN) — Picture this: A man is admitted to the hospital, unconscious, with a history of serious health problems and a high blood alcohol level. He has no identification and no family with him. On his chest, he has a tattoo: “Do Not Resuscitate.”

What would you do?

It sounds like a worst-case-scenario question from a medical ethics course, but the Miami Herald reports it really happened recently at Jackson Memorial Hospital. A newly published study in The New England Journal of Medicine explored the ethical and medical conundrums the staff faced when presented with a 70-year-old patient whose denial of potentially life-saving treatment was right there on his skin.

At first, doctors wanted to ignore it
According to the study, authored by a team of medical professionals from the University of Miami, the doctors attending to the man didn’t want to honor the tattoo because there was no way to be absolutely sure that’s what the man wanted.

“We initially decided not to honor the tattoo, invoking the principle of not choosing an irreversible path when faced with uncertainty,” the study said. The doctors chose to treat the patient with antibiotics and other life-saving measures.

However, they called in the hospital’s ethics consultant, who had a different opinion.

Differing view from an ethics consultant
Laws about do not resuscitate orders are sometimes complex and vary from state to state. According to an article in the Journal of General Internal Medicine, “Clinicians are morally and legally obligated to respect the preferences of patients to forgo life-sustaining treatment.” However, this typically means an official signed a do not resuscitate agreement such as a Physician Order for Life Sustaining Treatment.

Tattoos, while clearly administered with a patient’s wishes, aren’t legally binding, and are usually considered too ambiguous to act upon.

“The emergency responder may wonder: (D)o the letters stand for Do Not Resuscitate? Or Department of Natural Resources? Or someone’s initials? Second, the tattoo may not result from a considered decision to forego resuscitation. Errors in interpretation may have life and death consequences,” the Journal of General Internal Medicine article said.

In the case of the man in the Miami hospital, the facility’s ethics consultant said the doctors should honor the tattoo.

“They suggested that it was most reasonable to infer that the tattoo expressed an authentic preference, that what might be seen as caution could also be seen as standing on ceremony, and that the law is sometimes not nimble enough to support patient-centered care and respect for patients’ best interests,” the study reads.

There was also another development that supported the consultant’s decision: The hospital’s social work department located a copy of the man’s Florida Department of Health “out-of-hospital” do not resuscitate order, which supported the request on his tattoo.

The outcome
Ultimately, a do not resuscitate order was issued, and the man died. The authors of the study said they were “relieved to find his written DNR request,” but the initial confusion over the tattoo brought up a curious issue that has been debated in the medical community on several occasions.

CNN has contacted the authors of the study and is waiting to hear back.