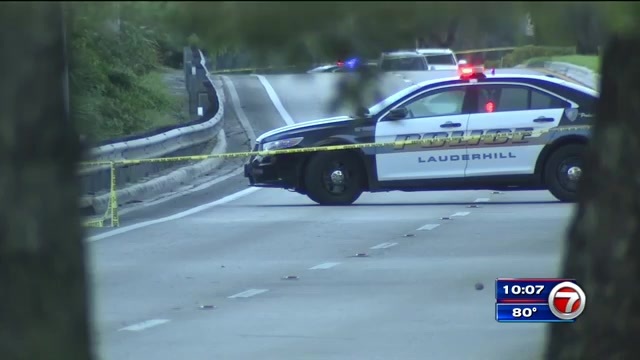 LAUDERHILL, FLA. (WSVN) - A death investigation is underway in Lauderhill after a man was found dead on the side of a road.

Lauderhill Police received a call about someone lying face down off of the 4200 block of Rock Island Road at around 5 p.m., Sunday. The person did not appear to be moving or breathing.

Responding officers confirmed the victim was male, and the rescue team declared him dead.

“This area is pretty desolate in that it butts up against the Florida Turnpike over here between Commercial and Oakland [boulevards], and there’s nothing around,” said Lauderhill Police Lt. Mike Santiago. “The body’s lying on the north side of the road on the embankment over here, and if you notice that you have a golf course over the west side and there’s a lot of trees, it’s a pretty covered, desolate area.”

There were no visible injuries to the body.

Police shut down Rock Island Road for hours while they investigated. It has since reopened.

If you have any information that could help investigators, call Broward County Crime Stoppers at 954-493-TIPS. Remember, you can always remain anonymous, and you may be eligible for a $3,000 reward.