Clicking a seat belt into place, putting a car into drive and hitting the open road are freedoms that were stolen from Perez last year. Back in April of 2016, a woman who, authorities said, was driving under the influence lost control of her SUV and slammed into him at Tamiami Park while he was watching his son’s baseball game.

Perez lost both legs in the crash and spent months in the hospital. He underwent 21 surgeries, with more than 100 blood transfusions.

The tragedy left him unable to drive. “Sitting behind the wheel, being able to drive, being able to get up in the morning and go grab a cup of coffee, you know, a couple blocks away, is something that we take for granted,” said Perez, “but when they take it from us, we miss it so much.”

On Thursday, Perez and his loved ones got a surprise on four wheels: a new Toyota minivan. 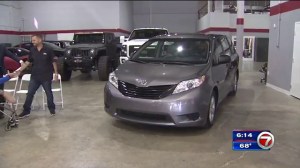 The Auto Firm in Southwest Miami-Dade teamed up with South Dade Toyota to give this family a vehicle that Perez will be able to drive.

7News cameras captured Alex Vega from The Auto Firm explaining to the principal how they will modify the vehicle. “We’re going to remove everything in the bottom. We’re going to make it so it goes down, up. You can control it however you want,” he said.

When told he sounds like a teen who just got his car keys for the first time, Perez replied, “I do! I told Alex yesterday, I said, ‘This is like a kid the night before Christmas.'”

Special day today! @javistrong1 Came by thinking it was the day we'd start modifying his car, Instead was blessed by many in our community pic.twitter.com/fYyH1zxbuB

The principal’s wife, Maytee Perez, said the new vehicle will help restore a long-standing tradition in the family. “I’m sure, when he goes to get breakfast for us in the morning, as the car is ready, it’s like, ‘yay!’ You know, it’s something he used to do for us on Sundays,” she said. “Being able to do that again, it’s as if he’s becoming the man he was again.”

The community has come out in full force to support Perez, first helping cover his medical bills. His first night in the hospital cost $1.5 million alone.

Last Saturday, the Redland Golf and Country Club in Homestead hosted a golf tournament in his name.

And now, Perez is the proud owner of a brand-new minivan.

It has been an emotional journey for Perez and family. “I can’t process everything that’s taken place just with the phone calls and letters,” he said. “People that I don’t know that have come out to see me, have donated their time, their efforts, money, all kinds of stuff. It’s amazing.”

Perez will not be able to get behind the wheel just yet. The minivan needs to be outfitted for his needs before he can hit the road.