KEY LARGO, FLA. (WSVN) - A message in a bottle traveled thousands of miles across the Atlantic to reach the Florida Keys, and the couple who found it was determined to find out where it came from and how long ago it was tossed in the water.

The bottle washed ashore near the Key Largo home of Ruth and Lee Huenniger in the wake of Hurricane Irma.

“We are learning all about pirates. We would like to see how far this message goes,” the message read. “Please write and tell us where you found the bottle.”

The note in the bottle was signed, “Class 213, Chapelpark School” in Forfar, Angus, Scotland, meaning it had traveled more than 4,000 miles.

The Huennigers decided to write back.

“I thought, ‘Let’s see if this gets all the way back to Scotland,'” said Ruth. “I mean, I’d never heard of Forfar.”

The couple’s letter let the students know where the bottle had landed after the storm. They ended their correspondence back to the students with a request: the couple wanted to know when they had originally put the bottle in the ocean.

But the Scottish school they wrote to closed back in 2008, the Miami Herald reports. So the postman brought their letter to the area’s new school instead, where staff forwarded it to a retired schoolteacher, Fiona Cargill.

Cargill spoke to 7News over the phone, and recounted how her class project began.

“We just wanted to see how far it would go,” she said.

Cargill had led the activity at the school, and found a class photo that showed her students who sent the message dressed as pirates. 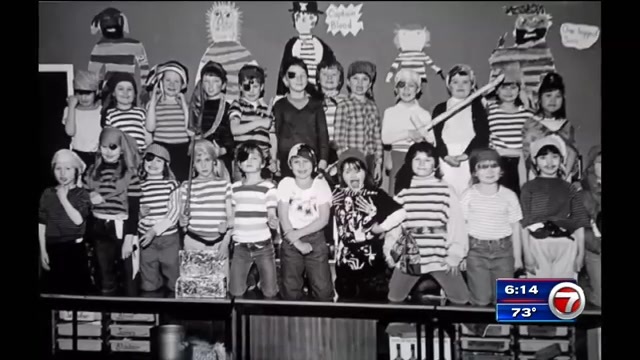 Cargill said they’d studied the thieves of the sea.

“We decided that perhaps pirates would send messages in bottles,” she said. So that’s what the students did.

“They covered them with sticky plastic to keep them from getting wet, put them in bottles and then got a fisherman to put them in the North Sea,” she recalled.

As it turns out, this class activity took place decades ago, at some point during the 1980s. In her reply to the Huennigers, Cargill wrote, “That bottle was set on its journey more than 30 years ago!!!”

The school is no longer around, Cargill is retired, and her students are nearing 40. Even so, the lesson wasn’t lost.

Cargill said there are at least three more bottles out there. Their destinations remain unknown.

The Huennigers said they will be keeping an eye out for them.