KEY BISCAYNE, FLA. (WSVN) - Miami Fire Rescue’s technical rescue team has saved a worker who was dangling from his harness after a scaffold collapsed in Key Biscayne.

That worker was left dangling in the air about 12 stories up, Thursday, at around 2:45 p.m., at the Grand Bay Tower condominium, located at 430 Grand Bay Drive.

It appears that the man was working on the outside of the building when the scaffold gave way.

The special response team from the City of Miami worked for about an hour to bring the victim down while dozens gathered to watch the rescue take place. They managed to strap the worker up and two team members rappelled down with him.

Once on the ground, he was put into a Key Biscayne Fire Rescue ambulance to be evaluated. He was later transported to Jackson Memorial Hospital to be checked out further.

One witness described what she heard from below. “I heard it immediately, and I live around here,” she said. “I thought it was something else. I thought he was hurt or something, but thank God he stayed up.” 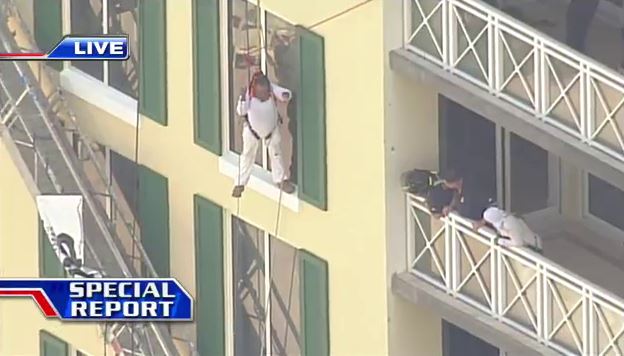 Maggie Castro of the Miami-Dade Technical Response Department spoke via phone to explain how these kinds of rescues unfold. “It appears they’re going to send someone over the edge, lower them to the patient and assess the patient and his harness,” she said. “They have secured the victim with a secondary line in case his line gives way. Now, the technician is going to be lowered down to the patient.”

Another witness believed that his harness saved him. “Thank God he was wearing his harness and the equipment, and he was able to communicate to rescue,” she said.

Key Biscayne Fire Rescue initially responded to reports of a person hanging from the 12th floor as a result of the scaffold’s collapse. The scaffold collapsed on one side after some of its motor malfunctioned in some way.

The worker was hanging all the way down to the ninth floor and had one foot on a windowsill as rescuers spoke to him from an adjacent balcony.

“He was stable. He was constantly communicating with us, and we were able to establish a great rapport and maintain him while he was calm,” said a Miami Fire Rescue official. “We do have OSHA responding. We have Key Biscayne Police Department on scene. They secured the area until OSHA comes out and investigates.”

Multiple fire rescue agencies from around Miami-Dade assisted in this rescue effort.