7News cameras captured an older white horse getting out of a trailer, her ribcage clearly visible as she arrived at her new home in Southwest Miami-Dade, Friday night.

“It’s only a matter of time before she would have been dead,” said Laurie Waggoner, Director of Operations with the South Florida Society for the Prevention of Cruelty to Animals.

Hours earlier, 7Skyforce HD hovered above the ailing animal as she stood in a field in Northwest Miami-Dade, shortly before the South Florida SPCA rescued her.

The SPCA got a tip that she had been left abandoned in a field and was in such bad shape, she wouldn’t have lasted much longer. “She came walking up to us, hungry,” said Waggoner. 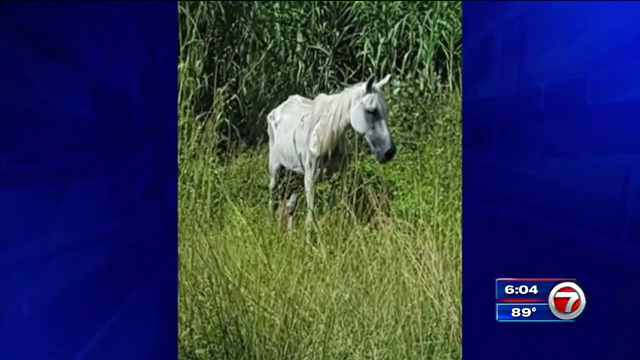 Waggoner said this horse is the latest victim of a troubling trend: animals left to die, abandoned in fields.

Oliver, an Arabian gelding, was rescued by the South Florida SPCA on Thursday after someone saw him wandering down a road near the East Everglades, in Southwest Miami-Dade. “He was abandoned. We believe he was abandoned,” said Waggoner.

The horse was found sick and starving, with sores all over his body. “He’s been neglected for quite a while. He’s probably at least 200 pounds underweight,” said Waggoner.

Summer sores are a common condition for horses in this region, but when left untreated, they can take over large parts of the animal’s body.

“You see a lot of bad things down here in South Florida, but these are some of the worst I’ve seen,” said Dr. Carla Munoz, the veterinarian treating Oliver.

Animal welfare officials said they have to rescue horses like these far too often. Back in May, the SPCA saved five horses from the brink of death after they were abandoned in the same area where Oliver was found.

As for the white horse found on Friday, it remains unclear where she came from or what it will take to get her back to health. “It doesn’t matter how many times you see it. It always surprises me that someone can watch this happen,” said Waggoner.

Waggoner said they found a dead horse in a field nearby when they rescued her and, if it weren’t for that tip, she would have suffered the same fate. “Thank God that somebody saw her and reported her, or as bad of shape as she’s in, it would have only been a matter of a week or two,” she said.

But the two horses SPCA rescued this week appear to be heading toward a happy ending to their situation.

With the help of medication and food, Oliver should be healthy in about four to six months. The SPCA will conduct a DNA test to figure out where the Arabian gelding came from.

Caretakers are also adding something special to help with his recovery. “A lot of attention here and a lot of love,” said Waggoner.

There are currently about 60 horses at the New Ranch. If you would like more information about the South Florida SPCA, click here.