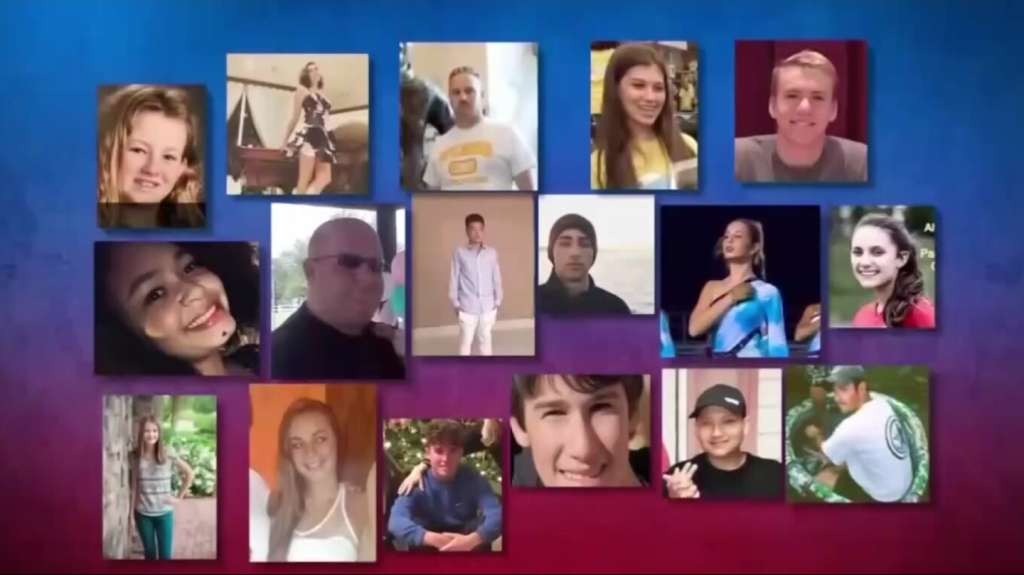 He appeared in court on Wednesday morning.

In the coming months, jurors will decide whether Cruz should be sentenced to life in prison or face the death penalty.

During the hearing, family members of the victims could be seen in tears.

Fred Guttenberg, whose 14-year-old daughter Jaime Guttenberg died in the shooting, was seen consoling other parents during the hearing when their child’s name came up in testimony.

After his pleas, Broward State Attorney Mike Satz recounted the details of the murders. Cruz killed the 14 students and three staff members on Valentine’s Day 2018 during a seven-minute rampage through the Freshman Building on the school’s campus.

During his plea, Cruz offered an apology, saying, “I am very sorry for what I did, and I have to live with it every day and that if I were to get a second chance I would do everything in my power to try to help others. I am doing this for you, and I do not care if you do not believe me, and I love you, and I know you don’t believe me, but I have to live with this every day. It brings me nightmares, and I can’t live with myself sometimes, but I try to push through because I know that’s what you guys would want me to do.”

He went on to say he hates drugs and that they cause racism and violence.

“I’m trying my best to maintain my composure, but I want you to know I’m really sorry,” he said.

Cruz also added that he wished it was up to the survivors to determine whether he lived or died.

The judge then asked Cruz several questions to clarify his statement, making sure he was aware that the judicial process does not allow for the victims to make that decision and that it remains in the jury’s hands.

Cruz’s apology was rebuffed by some of the victims’ families.

“When he said he wanted to speak, that was really an ugly surprise for us because there’s nothing he can say that’s going to change anything that he did,” said Tom Hoyer, the father of victim Luke Hoyer. “That was hard. We want him dead. We want him forgotten. I don’t ever want to hear this kid’s name again after all this is over.”

Tony Montalto, whose daughter Gina died in the shooting, called Cruz’s statement “ridiculousness” and that if Cruz wanted to do something for the victim’s families, he wouldn’t have killed their loved ones in the first place.

“There’s no moving on for us, there’s just simply moving around,” said Montalto. “Every day is painful, some days are just especially painful.”

Anthony Borges, who was 15 years old when he was shot several times in the massacre, survived and was present for the hearing. He said that he accepts Cruz’s apology. He said that Cruz made his decision and that now he must face the consequences of his actions.

“I didn’t feel scared. He’s a human. I’m a human, too,” he said. “He took his decision to do it, now he’s facing it. That’s not my right, like, I’m not God to take the decision to kill him or not. That’s not my decision. My decision is to be a better person and to change the world.”

“It’s really hard as a parent. It’s really hard,” said Borges’ father, Royer Borges. “I can’t compare myself to the other parents because Anthony is still here, so my mission is, as a parent of a victim, and he’s alive, [to] fight for him.”

Broward School Board member Debbie Hixon also spoke on the plea. Hixon lost her husband Chris in the shooting as he tried to disarm Cruz.

“Of course, very appreciative that we’re moving forward in the sentencing phase,” she said. “I would like to continue to say is that we should be honoring the victims. You heard what happened. You heard what happened to all those people. How can we not honor and show them? We have to stop giving this person any more energy. He has sucked the energy out of so many people, and we have to stop allowing him the power to take anything else from us. Hearing all of those people and how they died, 12 shots, eight shots, three shots, that’s not someone who was at all remorseful for what he was doing. He was adding up points.”

Linda Beigel Schulman, whose son Scott Beigel was a teacher at MSD and died while holding open a door for students to run to safety during the shooting, spoke virtually to 7News after the hearing.

“He no longer has to be the active shooter, he’s now the convicted murderer,” she said. “As far as the death penalty goes, I want him to suffer. I’m suffering, OK? The other 16 families are suffering. My family is suffering. I want him to suffer. That’s what he deserves. He knew what he was doing. They can plea what they want as far as mental illness goes. He had the whole thing planned, and so now I’m hoping that the jury plans his demise.”

For Cruz to get the death penalty, all 12 jurors will have to decide on it unanimously.