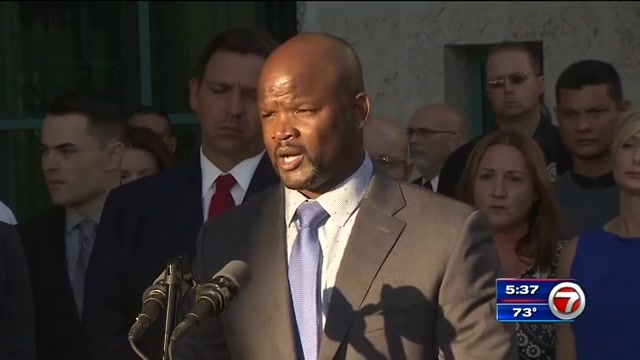 In a press conference, the governor announced Gregory Tony, 40, as Israel’s replacement.

“During this transition period, I plan on meeting with [as] many people as possible,” Tony said, “as soon as possible, and will rely upon some of the information and content and expertise that is already in this facility.”

With over a decade of law enforcement experience under his belt, Tony left the Coral Springs Police Department nearly three years ago as a sergeant.

He spent 12 years with the department.

“More important than that will be the content of his character; somebody who can lead with principles, with conviction and with integrity,” DeSantis said.

After his time in Coral Springs, Tony went on to create Blue Spear Solutions, a private company that trains employees how to react during an active shooter situation.

“Our focal point is preparing and giving the civilians, the victims, the bystanders, the immediate responders, as we refer to them,” Tony said, “a training mechanism and tools so that they can aid and treat themselves.”

Parents of the victims in the Parkland shooting responded to news of the newly-appointed sheriff.

“I know that incoming Sheriff Gregory Tony’s vast active shooter experience and knowledge will enable him to make the necessary changes,” said Max Schachter, whose son Alex was killed in the shooting, “so that Broward Sheriff’s Office is the shining example of law enforcement that all citizens want and believe they can be.”