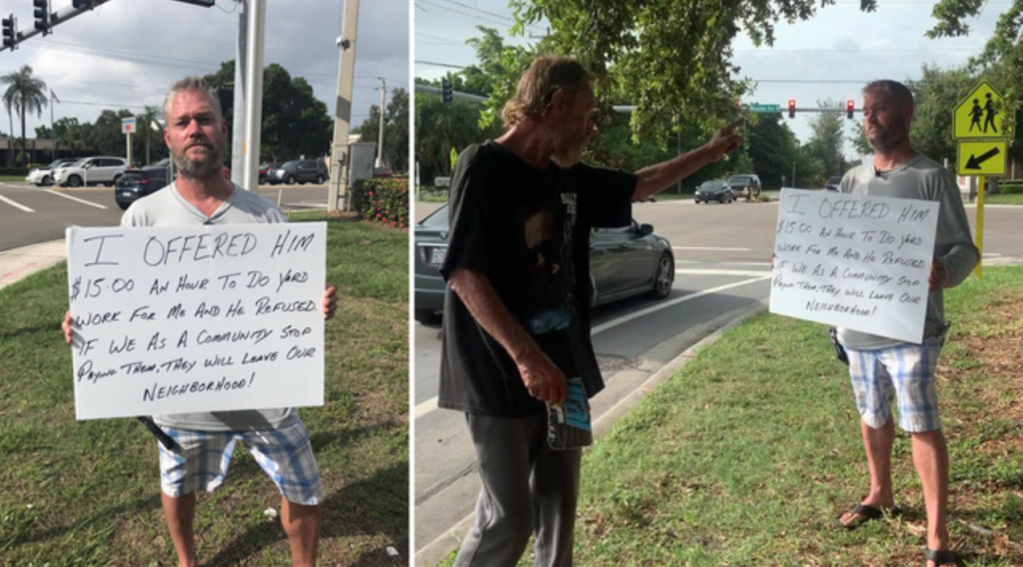 BRADENTON, Fla. (WSVN) — A Florida man is looking to warn the public not to give money to a panhandler who he said rejected his job offer.

According to Fox 13, Ryan Bray took some time to stand at an intersection in Manatee County to warn drivers not to give money to panhandlers.

Ryan Bray of Manatee County offered a homeless man a hand up when he asked for money. He offered the man a job. Ryan says he turned it down so he made this sign in response. Now when the man panhandles he holds this sign for all to see @FOX13News #Manatee #Bradenton pic.twitter.com/d1gQd4AIVq

Bray, who works for his family’s remodeling business, said he has seen the same group of panhandlers at the intersection before and wanted to do more than just give money for a temporary solution. So he said he offered one of the men a job paying $15 an hour to do yard work along with help to get off the streets.

“He reached his arms inside my vehicle, resting them and said, ‘Hey, do you have any money?’ I said, ‘No, but I have one better for you…’ He said, ‘Absolutely not,’ started getting belligerent and cursing,” Bray told Fox 13.

Bray said the panhandler then kicked his car’s tire and told him to leave.

Now, Bray is hoping to warn others and is now carrying a sign with a message: “I offered him $15 an hour to do yard work for me and he refused. If we as a community stop paying them, they will leave our neighborhood.”

“I can’t have my 13-year-old daughter and my wife driving with their windows up and being berated the entire time if they don’t get money,” he said.

The panhandler who Bray said turned down his offer confronted him at the intersection, saying he didn’t do anything wrong.

“You can’t shut me down, brother,” the man said.

Adell Erozer, the executive director of homeless assistance organization Turning Points told Fox 13 that the best way to help is to give money directly to organizations and charities helping the homeless.