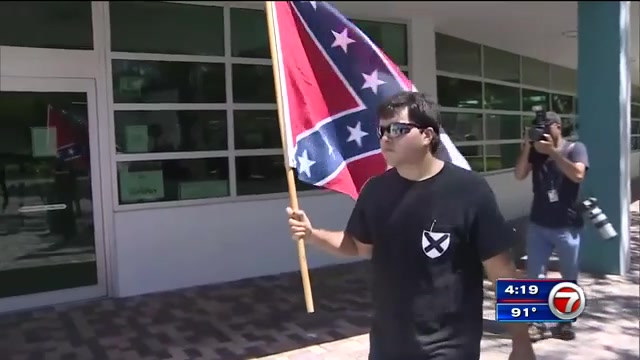 HOLLYWOOD, Fla. (AP) — A young man with a Confederate flag has been charged with inciting a riot, aggravated assault, disorderly conduct and brandishing a weapon — in this case, the flagpole.

Police said 21-year-old Christopher Monzon is the name of the man who threatened a crowd of about 100 people who gathered outside Hollywood City Hall Wednesday to support removing the names of Confederate generals from city streets. Monzon gave reporters a false name during interviews Wednesday prior to his arrest, identifying himself as Chris Tedino.

Monzon yelled at the demonstrators and then charged at them before officers quickly tackled him.

Hollywood’s commissioners later approved the removal of the names.

He was being held Thursday at the Broward County jail on $3,000 bond. Records do not show if he has an attorney.