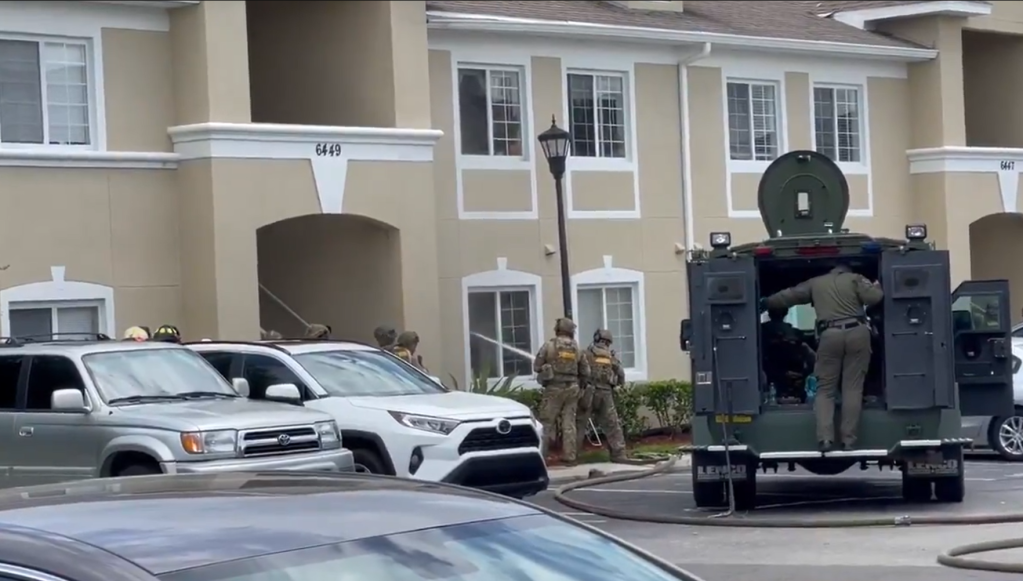 RIVERVIEW, Fla. (AP) — A man who announced on social media that he had killed his boyfriend and called on deputies to shoot him as well finally set his condo on fire and turned a gun on himself, a Florida sheriff said.

Firefighters covered by a SWAT team then rushed in to put out the flames and pull out the bodies of the two dead men.

Hillsborough County Sheriff Chad Chronister said a man called 911 shortly after 7:30 a.m. Monday to report that his friend had called him using FaceTime to say he’d killed his boyfriend during a dispute.

Keith Jackson, 30, then engaged deputies in a nearly seven-hour standoff.

The SWAT team, crisis negotiators and deputies converged on the building in the Villages of Bloomingdale, a gated community near Interstate 75 in the Tampa suburb of Riverview.

By then, Chronister said, Jackson was confessing in a live video streamed on Facebook to killing “the love of his life.”

The sheriff said Jackson didn’t answer phone calls or open the door when deputies knocked. Crisis negotiators watched on Facebook as Jackson held the gun to the camera and confessed to killing his boyfriend. He also told viewers that he had tried to kill himself three times since shooting his boyfriend but had failed so far.

He said he wanted sheriff’s deputies to come into the apartment and kill him, Chronister said.

“During this great length of time our negotiators are talking to him and trying to de-escalate him in any way that we can,” Chronister said. “He gets frustrated with us that we’re not going to take his life and, just before 1 p.m. this afternoon, tells our negotiators, ’If you guys aren’t going to do this we’re back at square one. I’m going to have to take matters into my own hands.”

A few minutes later, deputies surrounding the building saw smoke rising from Jackson’s condo. They called Hillsborough County Fire Rescue and the SWAT team covered them as they rushed in, acting quickly enough to save surrounding condos from damage, Chronister said.

The sheriff’s office said Jackson’s victim was in his 20s or early 30s, but they did not identify him publicly or release any details of his death.

“I think our community is on edge and this community has become too violent,” Chronister said. “I don’t know what it’s going to take, who it’s going to take being killed for us to finally say enough is enough and, as a society and a community, we’re not going to tolerate any additional violence. Because I tell you what, I’m tired of notifying individuals that their family member is deceased.”