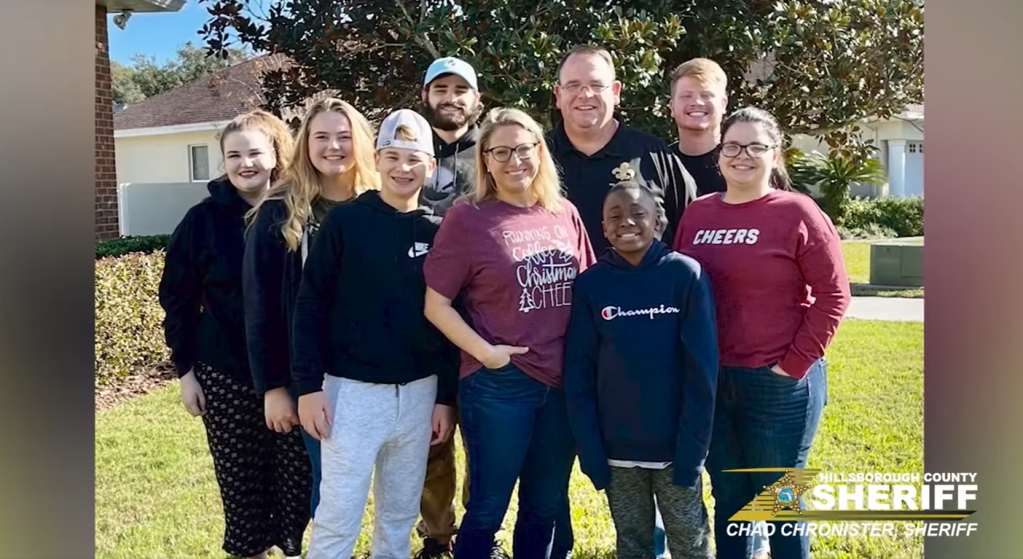 RIVERVIEW, Fla. (WSVN) — A Florida boy who was nearly killed by his father has found a new home with a detective who responded to the scene that night.

Among those who responded to the scene was Hillsborough County Sheriff’s Office Corporal Mike Blair, Fox 13 reports.

“By the time I arrived that night, we were told there was a child being medevacked to Tampa General, but he was not expected to live,” Blair said in a video the sheriff’s office posted.

Despite the prognosis, Ronnie pulled through and Blair paid him a visit while he was in the hospital.

“He kinda held onto my hand and, as I left he said, ‘Could you watch a movie with me?’” Blair said.

Unfortunately, Blair couldn’t stay and said he had to go back to work, but he told Ronnie he would come back that night and they could watch a movie then.

“I called my wife, we were planning to go on a date night that night, and I said, ‘Hey, instead of doing date night, do you mind if we go watch a movie with this kid?’”

Danyel, Blair’s wife said there was a connection instantly.

“I had already known that I would want to take Ronnie home with us starting that night,” she said.

The following year, in 2019, Ronnie was adopted by the Blairs.

Ronnie still thinks about his mother, Kenyatta Barron, and his sister.

“She was nice, pushed me on a swing, made me some good wings, made me all type of food. She was just a good mom,” he said. “My sister, she couldn’t talk, but she, like, could move her hand. We used to do sign language,” he recalled. “She was very nice.”

Blair said that while Ronnie is aware of his story, the now 12-year-old doesn’t want his story to define his future.

Ronnie wants to be an actor when he grows up. For now, he loves science and playing with his brother.