NORTH MIAMI, FLA. (WSVN) - Police are investigating after, they said, a tenant at an apartment building in North Miami shot at two firefighters who were responding to a fire at that location, early Wednesday morning.

Miami-Dade Fire Rescue responded to a two-alarm fire at the La Castellana complex, located at 13390 NE 7th Ave., at around 3 a.m.

Upon their arrival, crews noticed heavy smoke coming from the second floor of the building. According to officials, the fire was sparked by a dryer in the building’s laundry room. 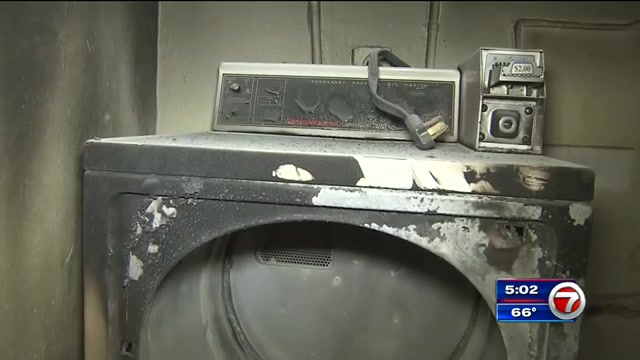 As crews began to evacuate residents, an adult male tenant on the fourth floor opened fire on firefighters. “Upon attempting to make entry to make sure all the apartments were clear, a handicapped individual shot through the door,” said Miami-Dade Battalion Chief Ken Wood. “None of our firefighters were injured and police are handling that now.”

Neighbors believe the tenant at Unit 415 is the one who opened fire.

“Nothing has happened. Bye,” the tenant told a 7News crew in Spanish from behind his door.

Cameras captured what appeared to be a bullet hole on a wall near the foot of the unit’s front door.

David Williams, who lives across the hall from the man who opened fire, said he was likely confused as to who was at his door. “He’s in a wheelchair, and I guess he didn’t want to get up or whatever,” he said. “He probably panicked when they were banging on the doors.”

Fire rescue authorities said they knocked and identified themselves at the time of the incident.

Miami-Dade Fire Rescue Lt. Felipe Lay added that crew members, in dire times, may forcibly enter. “Depending on the situation, we will force the door open to make sure there is nobody in the structure,” said Lay. “If they are asleep, we can wake them up, or if they are injured, we can safely pull them out and get them the care that they need.”

Officials said first responders’ concern was the heavy smoke produced by the fire.

Officials said no firefighters were struck by bullets and the fire has since been put out. “They’re good, they’re good,” said Wood. “Basically continuing moving on to what they’re supposed to do.”

Now, some residents are unhappy about dealing with the damage. “You tell us to evacuate, and I understand you have to do what you have to do, but do you really have to damage my door like this?” said neighbor Elmer Bailey. “I mean, come on! It’s not right.”

No charges have been filed. North Miami Police has not responded to 7News’ calls for comment.