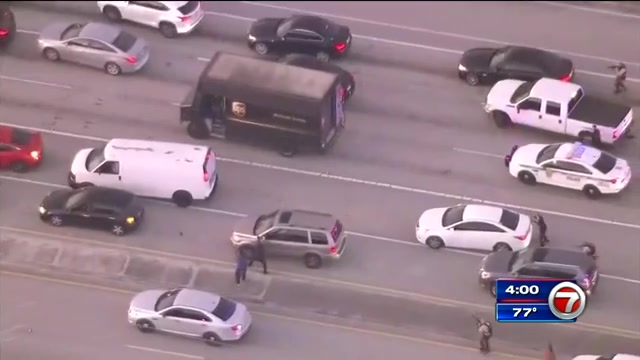 MIRAMAR, FLA. (WSVN) - More details have been revealed about the deadly Miramar shootout with police that left a UPS driver and an innocent bystander dead.

According to the Florida Department of Law Enforcement, a preliminary report shows that an estimated 21 officers fired approximately 200 rounds during the Dec. 5 incident.

The findings were presented Wednesday by FDLE Special Agent Troy Walker during a round table discussion with members of the Miami-Dade County Community Relations Board’s Criminal Justice Law Enforcement Committee and the Hispanic Affairs Advisory Board.

Walker added that additional review and investigation is still needed before actual numbers are released.

The pair then sent police on a chase that ended in a shootout between officers and the suspects at an intersection on Miramar Parkway in the middle of traffic. Ordonez and both subjects were killed in the shooting.

Cutshaw, who was waiting at the light, was also killed.

Walker is working to determine what exactly happened during the chase and if officers could have done something to prevent Cutshaw and Ordonez’s deaths. He added that all four autopsies have been completed, but investigators do not know if either victims were shot and killed by the suspects or police.

Officials continue to investigate the shooting.