MIAMI (WSVN) - Members of South Florida’s Cuban-American community came together Sunday to mourn the death of Miami Marlins pitcher Jose Fernandez, an athlete they championed as someone who will continue to inspire others who share his dreams.

Fernandez and two of his friends died early Sunday morning after, authorities said, the 32-foot boat they were riding on slammed into a jetty off Miami Beach. He was only 24 years old.

The man who would become a Marlins star was just a teenager when he made it to the U.S. from Cuba in 2008 — on his fourth attempt.

His loss is especially heartbreaking for Cubans and Cuban-Americans. Mourners who gathered Sunday afternoon for a special Mass at the Shrine of Our Lady of Charity, in Coconut Grove, said they understand Fernandez’s journey from the island nation to find freedom in America.

“Jose is the epitome of the American dream,” said church volunteer Ana Ortiz. “He was quick to say that those who have not lived with freedom do not know what it is to be free, so our community is very proud of him, and it’s a very sad day.”

In 2011, Fernandez was the Marlins’ first round draft pick, and two years later, he was able to share his accomplishments with his grandmother in an emotional reunion that was orchestrated by his team.

The emotional video of Fernandez and his grandmother’s reunion, posted on Twitter by Major League Baseball, is one you must see:

José Fernández had an incomparable bond with his grandmother. pic.twitter.com/wJh11v4BHM

Fernandez reached another milestone in 2015 when he became an American citizen. “It’s a dream that I had when I was little, and now that I’m actually achieving it, it’s a really amazing thing,” he said at the time. 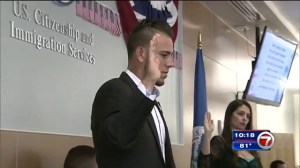 Many who attended Sunday’s Mass wore his team number. “He was really a family member. He was a big part of the team,” said Francisco Zwanzger. “He meant a lot, and I know a lot of people will miss him.”

“It’s a great loss for everyone. For Americans, for Cubans, for the game itself,” said Guillermo Blanos.

Sunday’s game between the Marlins and the Atlanta Braves was canceled. Instead, the team spent the day honoring and remembering the life and accomplishments of number 16.

Marlins President David Samson addressed reporters during an emotional press conference. “He represented freedom in a way that mostly no one here can understand,” he said. “Certainly not me, when you’re born into freedom.”

Samson also called the pitcher a role model whose example resonates well beyond professional baseball. “Jose had so many fans, not just here in Miami, but in Cuba and around the country,” said Samson. “He was a model for Cuban-Americans, for all people who need to work harder than most to have freedom.”

Just days ago, Fernandez had announced he and his girlfriend were expecting their first child.