The burglar tried to break into the Spy Spot Investigations Spy Store, located along East Hillsboro Boulevard but wasn’t able to fully get in. “This is probably the last place you would want to try to burglarize,” said Evan Tannenbaum, the store’s manager. “We got a whole bunch of surveillance cameras. We’ve got hidden cameras, we also do GPS tracking devices, audio recording devices.”

According to Tannenbaum, the subject tried to break in at around 4 a.m. Security cameras caught him walking down Hillsboro Boulevard, near Dixie Highway, before he picked up a rock and then headed for the front door.

“And then all he did was he went over to the door, he threw it right against it,” Tannenbaum said. 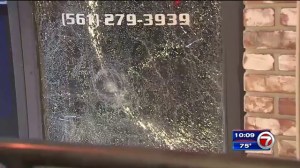 Tannenbaum said there are warning signs alerting that surveillance cameras are rolling. “And at one point, it looks like he can tell he’s on camera, but he doesn’t stop,” he said. “Then he comes back, basically kicks the door again, tries to push it with his hands and then walks away.”

The would-be thief then took off quickly, but surveillance cameras had already captured a clear image of his face.

Now Tannenbaum is hoping someone will recognize the bearded man who was wearing a baseball cap and hood. “I don’t know why you would try to rob a spy store,” he said. “The guy’s probably not the smartest criminal.”

If you have any information on this attempted burglary, call Broward County Crime Stoppers at 954-493-TIPS. Remember, you can always remain anonymous, and you may be eligible for a $3,000 reward.