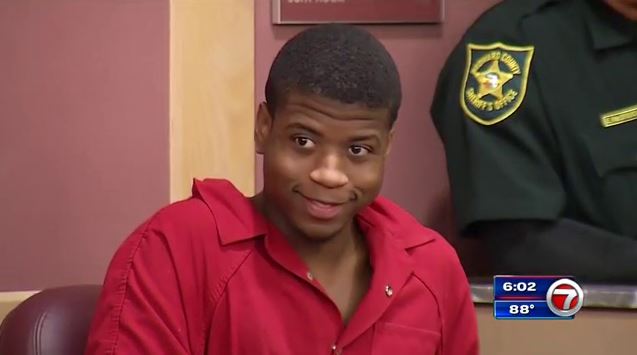 FORT LAUDERDALE, Fla. (WSVN) — An inmate who was shackled and in cuffs yet managed to escape from a Broward County courthouse has written a letter to a judge apologizing for his actions.

The inmate, Dayonte Resiles, made the dash out of the courthouse during a hearing, and now he’s explaining the reason behind his actions in a letter.

At some point after his recapture, Resiles wrote a letter to his trail judge, Raaj Singhal, who was on the bench the day he sprinted, July 15.

“Your honor,” he wrote, “I don’t wish to waste your time, so I will get straight to the point. I want to apologize for escaping from your courtroom. I hope you don’t take it personal because your [sic] one judge that I have great respect for.”

Resiles had been in Singhal’s courtroom for a death penalty hearing. He’s charged in the 2014 stabbing death of a Davie woman, who, according to police, caught him burglarizing her home.

In his letter, he wrote, “I felt I was at a dead end with nowhere to turn to. I tried to appeal to everyone, to prove to them I was innocent, but my voice went unheard. Safe to say now I have received enough attention, and people believe in my innocence. I just ask for you to please judge me fairly. I don’t want you to be bias [sic] towards me because of the escape. When I escaped, my whole reason was to gather enough info on my case to prove my innocence. As you can see, I didn’t commit any crimes, hurt anyone, or go far. I just wanted time to prove my innocence. Thanks for your time.”

At a hearing after his re-arrest, despite the seriousness of the charges, he couldn’t stop smiling. His own attorney said he has a flat rule, which was to not write to the judge.

Despite the advice, Resiles, did things his own way. He also promised others that he would send letters defending his actions, as well.

If you’d like to read the full letter, go to: https://wpadmin.sunbeamtv.com/wp-content/uploads/sites/2/2016/09/resiles-letter.pdf