Cat found with arrow in head in Miami Beach

MIAMI BEACH, FLA. (WSVN) - Police are investigating after a cat was found with an arrow in its head under a dumpster in Miami Beach.

According to Miami Beach Police, a passer-by found the beige cat in an alleyway near Eighth Street and Collins Court, Wednesday morning, with an arrow through his head and another object through his neck.

Giorgio, a hotel employee, said he found the cat under the dumpster, in pain.

“I drove down here, and I found one of the cats with, I don’t know what, in its head,” said Eleonora Todaro.

Simone Anderson, a local animal rescuer for years, was called in to help. “I could see the blood dripping out of his mouth, and the arrow was still stuck, or the two arrows, or whatever the second item was, in his head.”

Doctors said the arrow penetrated behind one of the cat’s eyes and came out his mouth. “I’ve never seen anything like this,” said Dr. Rachael Johnson, a veterinarian at the hospital.

“No animal should suffer the pain he suffered,” said Anderson. 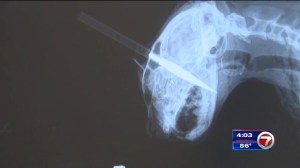 Johnson said she knew the animal was in poor condition, but the X-ray offered an even uglier picture. “Clearly, this is the arrow, which had gone in through the top of the skull,” she said.

Doctors euthanized Strush due to the severity of his injuries.

Strush was one of four alley cats who live behind the Franklin Hotel on Collins Avenue and are cared for by the hotel’s former owner who is now offering a $20,000 reward for information on who might have done this to the cat.

“I think one of the important things about it is, not only the animal suffering, but also the concern about the individuals that are doing this to animals, that they’re dangerous people,” said Dr. Rachael Johnson, a veterinarian at VCA Alton Road.

“This is the most horrendous crime I’ve ever seen committed on an animal in those nine years,” said Anderson.

“That they would do this to an animal, you worry that, are they dangerous to people as well, in the home or elsewhere?” said Johnson.

Todaro, who used to own the Franklin Hotel, is furious about the cruel crime. “I’m speechless. I’m disgusted.”

Police said whoever did this to the cat will be charged with animal cruelty.

“It’s sickening, and whoever did this is a psychopath and a threat to the community,” said Anderson.

“It’s not good, ’cause it’s something called karma. It’s coming back,” Giorgio said.

If you have any information on this case of animal cruelty, call Miami-Dade Crime Stoppers at 305-471-TIPS. Remember, you can always remain anonymous.