Among the items were flags, a shadow box with photos of the victims, pinwheels, stuffed animals and framed poems. 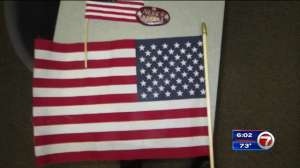 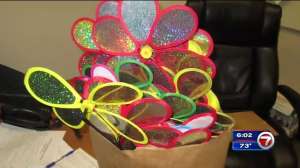 Deputies arrested 37-year-old Michael Kennedy and 40-year-old Kara O’Neil, and charged them each with one count of disfiguring a tomb or monument, a third-degree felony.

BSO responded to the scene, Sunday night, after receiving phone calls about people raiding the memorial.

Investigators said witnesses spotted O’Neil and Kennedy loading up their car with items from the memorial.

When they responded to the scene, deputies said they also found the couple placing a bundle of pinwheels in the back of their car.

According to the arrest report, O’Neil told deputies, “Oh, we were going to make a memorial of our own at the high school,” and Kennedy added, “I took that banner down because I am pro-gun.”

Investigators said the couple appeared to be intoxicated and were belligerent with the deputies.

Upon hearing of the crime, visitors at the memorial were horrified. “This is unbelievable that people would do such a heinous thing when this is a shrine, and they would steal things from it,” said visitor Carol Steinman. “It’s absolutely outrageous. It belittles the whole universe — the spectrum of human kind.”

“I have no idea what their motives were,” said Stoneman Douglas student Brianna Denver.

“I thought it was horrible, it’s terrible,” said Brianna’s mother, Marina Denver. “I mean, what are they thinking? What for? It’s just disgusting.”

The City of Parkland has announced that they will begin to pick up all the items from the memorial on Wednesday. All of the mementos left behind will be moved into a climate-controlled storage until they can be incorporated into a permanent memorial.

On Monday, Kennedy told a judge he didn’t think there was enough evidence to hold him. “Yes, I believe that the charges against me have insufficient facie evidence, and it just doesn’t meet the elements, judge,” he said.

Both Kennedy and O’Neil remain in jail on a $1,000. They have also been ordered to stay away from the school upon their release.