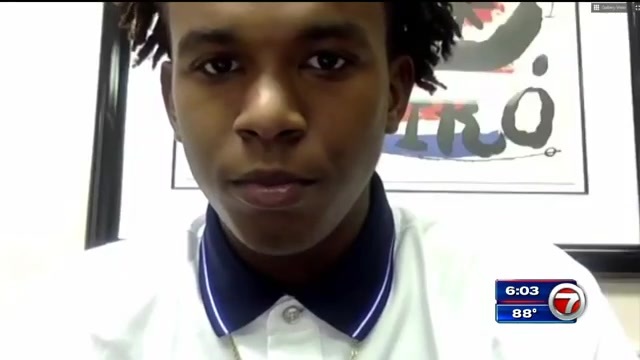 FORT LAUDERDALE, FLA. (WSVN) - Delucca Rolle, the Tamarac teenager who garnered national headlines after cellphone video of his rough arrest went viral, took the stand and shared his side of the story, as two of the arresting Broward Sheriff’s Office deputies face charges over the incident.

BSO Deputies Gregory Lacerra and Christopher Krickovich have asked a judge to dismiss their misdemeanor charges for their actions during Rolle’s April 2019 arrest, citing Florida’s “stand your ground” law.

Rolle described what he was feeling during the tense takedown, after he had been pepper-sprayed.

“I don’t know what I was thinking. I just thought, ‘My eyes are burning.’ That’s all I had my mind on,” he said.

Krikovich was fired, and Lacerra is currently on restricted duty.

Their attorney, Eric Schwartzreich, said his clients were defending themselves.

“There was terror and mayhem at the Tamarac Town Square Plaza,” he said. “The evidence is going to show that Delucca Rolle committed an assault.”

But prosecutors said the deputies went too far.

“You’re going to be able to see Delucca Rolle outside of the plaza, on the sidewalk by the street, by himself, not part of any fray or any group,” said prosecutor Justin McCormack,

Rolle, then 15, was initially arrested, but charges were later dropped.

“Mr. Rolle, I guess my question for you is, you know that being under oath means to tell the truth, right?” Schwartzreich asked Rolle.

“Whether you remember saying it or not, today, when you’re coming here, are you saying what would benefit your position in the case or what you actually remember happened?” said Schwartzreich.

The attorney went on to say Rolle helped initiate group fights like the one captured in the cellphone video.

“You didn’t just go there and break up fights. You went there and you would be more than a spectatior, and make commentary and egg on the fights. Now, isn’t that true, Delucca?”

The hearing wrapped up Friday afternoon. It is expected to resume Monday morning, and it could continue for several days.