More than 175 cats and dogs will be evacuating to San Francisco, where the animals will be sheltered during Irma. ” They are on their way thanks to assistance from the stony LaRussa Animal Rescue Foundation, Wings of Rescue, FreeKibble.com, GreaterGood.org and the Rescue Bank,” said the Broward Humane Society on Instagram.

Our animals are on their way…

Posted by Humane Society of Broward County on Thursday, September 7, 2017

These pets being evacuated comes before the official mandatory evacuation order at noon, Thursday, for parts of Broward County. “We wanted to be proactive before the storm and get as many of the animals as we had at the shelter out of the facility,” said Ric Browde with Wings of Rescue.

A caravan full of animals ready to be evacuated, Thursday morning, headed to Fort Lauderdale Executive Airport. The cats and dogs are expected to take shelter at the Stony LaRussa Animal Rescue Foundation in Walnut Creek, California. This is a one-way flight in order to make room for other animals in South Florida who need refuge.

“To make room for those that are going to come in after the hurricane comes through,” said a volunteer. 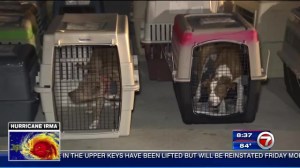 Volunteers in South Florida have their own preparations to make, but some decided to take care of animals that need a home during the storm. “Whether it’s with our cars or whatever we can do because, although we have a lot going on with that gal Irma, we definitely know we need to come together for our communities,” said Angela Chrysler of Team National Hope.

“It’s a feel good, too,” said another woman. “We’re gonna have a disaster, but we might as well feel good about something, too.”

“When people put others and animals and everything in front of their own preparations, it’s truly amazing,” said a man. “It’s touching”

The rescue shelter receiving these animals will also transfer them to other shelters and rescues in the California Bay Area.