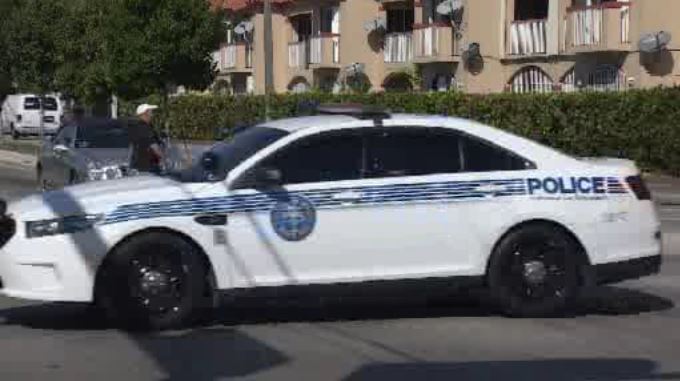 MIAMI (AP) — On what is likely the last clear day in Florida before Hurricane Irma’s monster wind and rain, social workers and police officers are giving Miami’s estimated 1,100 homeless people a stark choice: Come willingly to a storm shelter, or be held against their will for a mental health evaluation.

With the outer edge of the storm approaching Friday, these officials — backed by a psychiatrist and observed by an Associated Press team — rolled through chillingly empty downtown streets as dawn broke over Biscayne Bay, searching for reluctant stragglers sleeping in waterfront parks.

“We’re going out and every single homeless person who is unwilling to come off the street, we are likely going to involuntarily Baker Act them,” said Ron Book, chairman of the Miami-Dade Homeless Trust.

Invoking the “Baker Act” — a law that enables authorities to institutionalize patients who present a danger to themselves or others — is not something law enforcement does lightly, but officers detained at least six people by Friday afternoon. Under the law, they can be held up to 72 hours before the state would have to go to court to prolong their detention.

By then, Irma’s howling winds and terrifying storm surge should be somewhere north of the city.

“I am not going to sign suicide notes for people who are homeless in my community. I am just not going to do it,” Book added. “That’s why you have a Baker Act. It’s there to protect those who can’t otherwise protect themselves.”

Book’s group was working closely with police, who acknowledged that the effort is unusual: Officials said it is the first time Miami has invoked the law for hurricane preparedness.

About 70 people willingly climbed into white vans and police squad cars Friday, joining others who already arrived at shelters. About 600 others were thought to remain outside somewhere, exposed to the storm, despite mandatory evacuation orders for more than 660,000 people in areas that include downtown Miami and coastal areas throughout the county.

One older man pushing his belongings in an empty wheelchair in Bayfront Park tried to wave them off.

“I don’t want nothing,” he said, insulting a social worker.

“So you are cool with dying in the streets?” he asked.

“Get out of my goddamn face,” he responded.

“What’s your name?” asked Dr. Mohammad Nisar, a psychiatrist who was looking for evidence of mental illness, a necessary factor for a Baker Act detention.

“None of your damn business!”

“We are here to help you. Listen to me. You are being very aggressive. We are trying to help you,” Bernat said. “It’s very dangerous out here.”

“You are trying to make me go somewhere I don’t want to go,” he insisted.

Finally, the man was handcuffed without a struggle and taken to Jackson Memorial Hospital for a 72-hour psychiatric evaluation.

“A person who has a history of mental illness and who is staying in harm’s way, and doesn’t have a logical cohesion of what is right or what is wrong at that point, is a harm to himself, and at that point we can Baker Act them for his own protection,” Nisar explained later.

Friday’s encounters alone weren’t enough to justify their involuntary detention — Nisar said social workers and officers on the team already know these men and can testify to prior signs of mental illness to support each case.

Also, the law requires a court order to keep them detained against their will after 72 hours, and public defenders have pushed back against such requests, citing court rulings that the Baker Act can lead to unconstitutional curtailments of individual liberty.

But those hearings won’t happen until Monday at least — and by then, Irma’s wrath will have moved on from Miami.

Ron Honberg, a senior policy adviser for the National Alliance on Mental Illness, said there is always potential for a slippery slope that would violate people’s civil rights, but this storm seems extraordinarily dangerous.

“I think sometimes situations arise that are so dire that safety consideration supersedes everything else,” he said. “But you don’t want this to be used on people who don’t have a mental illness.”

The executive director of the American Civil Liberties Union of Florida said people need to be encouraged to take shelter during a disaster, but there are limits.

“But this is a democracy, and you can’t force people to seek shelter if they don’t want to,” Howard Simon said. “I don’t think you can manipulate the mental health laws by assuming that anyone who is homeless and doesn’t seek shelter is mentally ill.”

After driving more than 400 people to shelters, the Homeless Trust said it would continue searching for stragglers until winds reach 45 mph (72 kph), sometime Saturday afternoon.

“I am not happy to have to do it,” said Steven Nolan, whose face has weathered many days of Florida sunshine. “But I’d rather be in there than out here when the storm hits.”