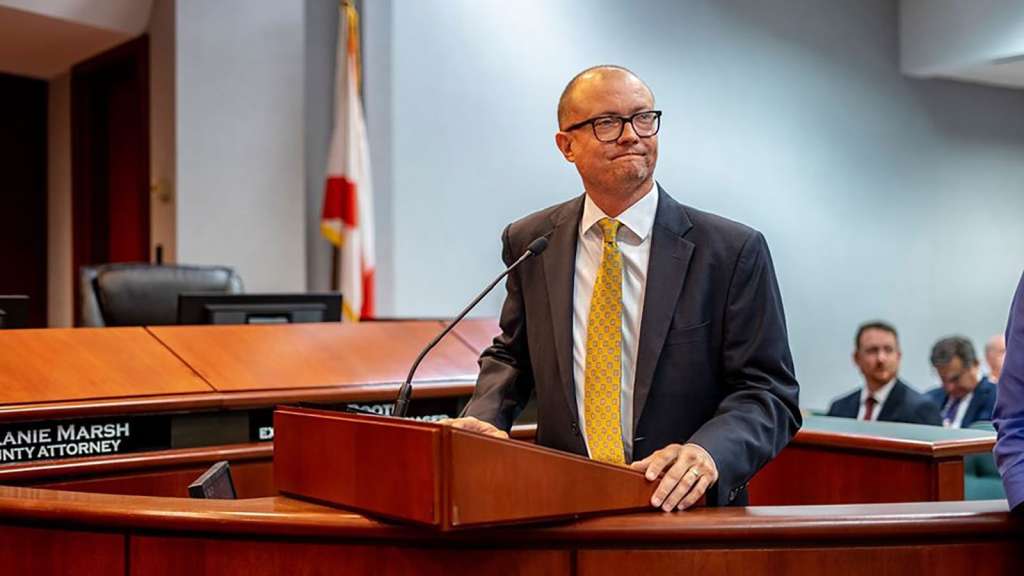 In a unanimous decision, the Lake County Board of Commissioners passed a resolution declaring itself a "Second Amendment Sanctuary" this month.
CNN

(CNN) — In a unanimous decision, the Lake County Board of Commissioners passed a resolution declaring itself a “Second Amendment Sanctuary” this month.

The central Florida county is the latest municipality in the United States to pass a measure vowing to protect its residents from attempts at gun control.

Cities and counties in Illinois, Colorado and California also have proclaimed themselves sanctuaries, saying they won’t enforce state laws that infringe on residents’ right to bear arms.

The jurisdictions say the declarations — a riff on “sanctuary cities” that protect immigrants — are in response to gun control measures, including red flag laws and gun buyback programs, that they say violate the Second Amendment.

Lake County Commissioner Josh Blake, who authored the Florida municipality’s resolution, said it draws a line in the sand and “sends a message to what can best be described as the authoritarian control freaks.”

Gun sanctuaries across the US

Blake’s resolution is the latest in a string of others that have been approved across the country.

In part, the resolution states the Mohave County Board of Supervisors “will not authorize or appropriate government funds, resources, employees, agencies, contractors, buildings, detention centers or offices for the purpose of enforcing laws that unconstitutionally infringe on the people’s right to keep and bear arms.”

Texas counties have approved similar resolutions. One rural California city passed its own version over the summer. And counties in Illinois jump-started the movement when they began passing resolutions last year.

“We don’t want our Second Amendment rights to be stripped away from us,” David Campbell, vice chairman of the Effingham County Board, told CNN shortly after the Illinois county passed its “sanctuary” resolution. “If we protect immigrants with sanctuary cities, why not use similar laws to protect our rights to own a gun?”

But Darrell Miller, the co-director of the Duke Center for Firearms Law argues sanctuary resolutions are merely “constitutional politics.”

There’s no legislation or court decision that infringes on Second Amendment rights, he says.

“Why are they fearful any gun regulation leads to some kind of confiscation? Well, I don’t know,” Miller told CNN. “This has been a talking point for gun organizations like the National Rifle Association since the late 1970s, which is, ‘You can’t allow any kind of gun regulation because it will lead to universal civilian disarmament.'”

That won’t happen, he said, because of the landmark District of Columbia versus Heller Supreme Court decision in 2008.

“Heller isn’t going anywhere,” he said of the decision that maintained residents’ rights to bear arms in the home as long as it is for lawful purposes — for example, self-defense.

“It’s a constitutional right,” Miller said. “There’s no real proposition on the table that this court or any court in the near future is going to overrule Heller.”

Hitting back at new laws and proposals

Supporters of sanctuary resolutions, however, say they were passed in response to the introduction of new laws and proposals that local officials say violate their rights.

A number of Colorado counties declared themselves “Second Amendment Sanctuaries” following the state’s passage of a red flag law.

“Red flag” laws temporarily prevent individuals in crisis from having access to firearms through a court order. Critics say the laws are unconstitutional.

Colorado’s law allows family, household members and law enforcement to petition for a court order to temporarily take guns away from an individual deemed to be at significant risk of hurting themselves or others by having a firearm.

The sheriff said he’d rather go to jail than enforce the state’s red flag laws.

Red flag laws could raise issues around due process, Adam Winkler, a professor of law at the University of California, Los Angeles, says.

But it’s the kind of law that’s “likely constitutionally permissible.”

“Because it does try to target people who are in real danger and are a danger to themselves or others,” he told CNN.

In Lake County, Blake said his resolution is an answer to gun buyback proposals from Democratic presidential candidates.

“Many Americans have been absolutely shocked to hear recent pronouncements by prominent national candidates who are vying for the presidency of the United States threatening and even outright calling for national gun bans on some of the most popular and commonly owned rifles in this country,” Blake said.

“Many of them … have demanded mandatory buybacks which is just a fancy way of saying we’re going to force local law enforcement to confiscate weapons — legally owned weapons — from their fellow citizens,” he said last week.

Mandatory buybacks, Winkler says, may be attempted overreach on the government’s part — only if the weapons that are bought back are protected by the Constitution.

But courts haven’t ruled on which weapons those are.

“Handguns are protected,” Winkler told CNN. “Military-style assault rifles may or may not be.”