6 months later, 49 killed at Pulse are remembered in Orlando 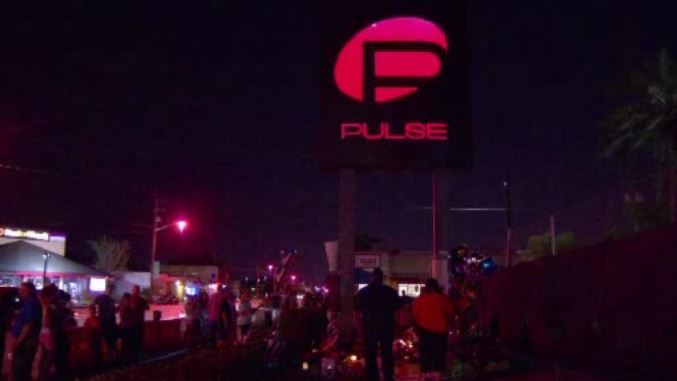 ORLANDO, Fla. (AP) — Relatives, friends and survivors of the Orlando nightclub massacre stood outside Pulse where candles were lit behind stars with the names of each of the 49 patrons killed, as they remembered the six-month mark Monday of the worst mass shooting in modern U.S. history.

They hugged one another outside the shuttered gay club, and at 2:02 a.m., the exact time gunman Omar Mateen started shooting inside, a moment of silence was held. Then they read the names of each of the deceased patrons.

Many wore black and others wore rainbow-colored “Orlando United” T-shirts and ball caps.

Dozens of other patrons were seriously injured during the June 12 massacre.

“Time really does fly,” said Orlando Torres, who hid in a bathroom when the shooting started. “It was very somber and very touching.”

Torres spoke to reporters after the early morning remembrance, which was closed to the public and media.

“This morning was very emotional. To the beautiful 49 we will never forget and continue to keep your pulse,” the official Pulse Twitter account read Monday.

Two other services were held in Orlando for the Pulse victims later in the day. Across the metro area, some buildings were lit up in the rainbow colors of gay pride.

The gates around Pulse were opened in the evening, again, this time for a public remembrance. Another service was held in the evening at the Orange County Regional History Center.

After the service, the history center opened an exhibit of digital photos showing Orlando’s response to the mass shooting. Tens of thousands of central Florida residents attended memorial services for the Pulse victims in the days after the massacre. They held candlelight vigils and lined up to donate blood. Rainbow flags were hung all over the metro area in support of the gay community.

Also Monday, the city of Orlando launched a program that allows businesses to designate themselves as safe places for gays and lesbians if they feel threatened.

Orlando police officers began distributing decals to local businesses to post in their windows identifying them as places members of the LGBTQ community can go if they feel they are in jeopardy.

Mateen, who had pledged allegiance to the Islamic State group, was killed in a shootout with SWAT team members after a three-hour standoff. The FBI is still investigating the massacre.

The future of the nightclub is still up in the air. Pulse’s owner last week said she is no longer interested selling the property to the city of Orlando which had planned to use it for a memorial.

Owner Barbara Poma says she plans to use the space to create a “sanctuary of hope” and a welcoming area where people can reflect on those affected by the tragedy.

At the history center service Monday, Poma said efforts for a memorial will begin soon, after the holiday season. She said it was essential that what happened at Pulse is never forgotten.

“Where do we go from here? We only have one way to go, and that’s forward,” Poma said. “We must find a way to defeat evil and find a way that, for generations to come, no one will forget what happened here.”