1 lane blocked on Dolphin Expressway due to car fire 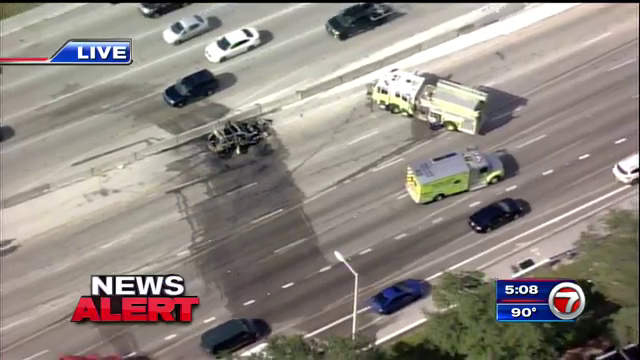 WEST MIAMI-DADE, FLA. (WSVN) - Officials are on the scene of a car fire that occurred along the Dolphin Expressway, causing traffic delays during the rush hour, Friday afternoon.

Miami-Dade Fire Rescue and Florida Highway Patrol responded to the scene around 4:15 p.m. after a car caught fire in the eastbound lanes of the Dolphin Expressway, between Northwest 72nd and 57th Avenues, in West Miami-Dade.

Fire Rescue has since put the fire out.

Four lanes were blocked at first, however, as of 5:45, only one lane is blocked.

Officials said there were no injuries nor transports.

Please check back on WSVN.com and 7News for more details on this breaking story.