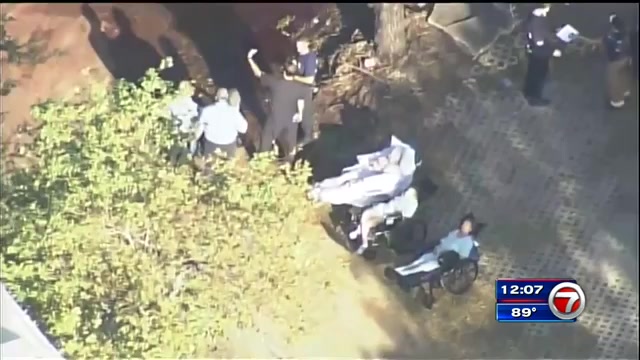 According to Hollywood Fire Rescue and Police, 145 people were evacuated Wednesday morning at The Rehabilitation Center at Hollywood Hills, located at 1200 N 35th Ave., due to intense heat and no power. Officials confirmed eight people have died, but it remains unknown whether the deaths are related to the heat.

The eight people who died on Wednesday were between the ages of 71 and 99. One of the deaths occurred on Tuesday, a city official said.

7News spoke with Hollywood Police Chief Tom Sanchez, Thursday morning, who said they will be executing search warrants and interviewing people as they continue to investigate. “If we find anybody did any criminal wrongdoing, we are gonna hold them accountable to the full extent of the law,” he said.

During a news conference, Thursday morning, City of Hollywood spokesperson Raelin Storey said, “The initial investigation has determined the facility had some power. However, the building’s air conditioning system was not fully functional. Portable A/C units were used in an attempt to cool the facility.”

As of Wednesday evening, the doors to the facility are closed and will remain that way after Florida Gov. Rick Scott directed the Agency for Health Care Administration to issue a moratorium.

Hollywood Fire Rescue said the call came in sometime around 3 a.m., Wednesday, referencing a heart attack. An hour later, crews responded to someone in respiratory distress. That’s when first responders realized there was something seriously wrong.

The facility was evacuated just after 7 a.m. 7Skyforce HD flew over the scene as the evacuations took place.

“Three individuals were found deceased on the second floor,” said Storey, “and multiple other patients in varying degrees of medical distress were also discovered.”

Medical professionals from Memorial Regional Hospital, just across the street from the nursing home, ran into action. “We mobilized at least 50 to 100 of our employees that left the hospital ran down the street and pulled all these patients out of the facility to make sure that they got to a safe place,” said Dr. Randy Katz.

Katz explained the nature of the patients transferred to the hospital shortly after the evacuation occurred. “Most of the patients have been treated for respiratory distress, dehydration and heat-related issues,” he said.

As of Thursday, about 70 patients were discharged from the hospital.

As a precautionary measure, Sanchez said he assigned officers to check the other 42 nursing homes throughout the city to make certain they’re properly taking care of the elderly.

This isn’t the first time the Hollywood rehab center has had issues. One issue had to do with a generator, and although investigators are not releasing much, they did admit that it was very hot on the second floor.

“There was no air conditioning there, and our friend Betty, on the second floor, she was out on the hall, and she could hardly breathe,” said someone who lost a loved one in the tragedy. “It was hot. They had her sitting in front of a fan.”

The rehab facility has run into trouble in the past, as they were cited in 2016 for having generator and maintenance issues.

The facility had since corrected the earlier generator violations.

According to the state report, ” … the facility was not able to produce any written documentation to substantiate the emergency generator…” nor could it provide proof that plans for a permanent generator had been submitted.

Broward County Mayor Barbara Sharief said, Tuesday morning, staff from the rehab facility contacted the emergency operations center to let them know they had lost power. Sharief also said they contacted FPL and reported it as a mission critical request for power.

On Wednesday, The Rehabilitation Center at Hollywood Hills released a statement that read in part, “We are devastated by these losses. We are fully cooperating with all authorities and regulators to assess what went wrong and to ensure our other residents are cared for.”

Senator Bill Nelson, attended a news conference Wednesday and said what happened was inexcusable. “I have spoken to the secretary of HHS today to alert him that they need to do an investigation,” he said. “People are just absolutely shocked that someone in a staff would not know enough that a frail elderly person is dying of heat exhaustion and would at least know to dial 911.”

7News spoke with concerned family members, who said they found out about the deaths on the news and did not receive a call from the facility.

“Nobody told us nothing. We don’t know if she’s dead or what,” said Flora Mitchell. “They should let the family know what happened to their family.”

A short time later, an information center was set up where family members could get information on their loved ones.

Another man said he was told the facility was safe. “I was told they were never going to evacuate for the hurricane. I’m not sure what’s going on,” he said. “It is very secure, safe facility. I’ve been here numerous times.”

In a statement, Sharief said, “Hollywood Hills, when asked if they had any medical needs or emergencies, did not request assistance or indicate any medical emergency existed.”

Other families were lucky enough to receive good news concerning their loved ones. “I feel great, happy, joy, everything and above,” said Theresa Maxwell. “I’m gonna call the family member and let them know she’s OK, and she’s looking like a glamorous doll, which she is. I was just happy to see my sister. Brought joy to my eyes, tears.”

Florida Power & Light spokesperson Rob Gould also commented on the situation. “It does point out the need to have a plan in advance,” he said. “This is why we say when if you’re dependent on electricity for medical needs to have back-up plans in place.”

According to officials, about 30,000 businesses and homes in the City of Hollywood are still without power.

Nelson said he contacted the Department of Health and Human Services and spoke about how to move forward in this case. “Whether it’s this one or others, this is an emerging scandal of great proportions,” he said.