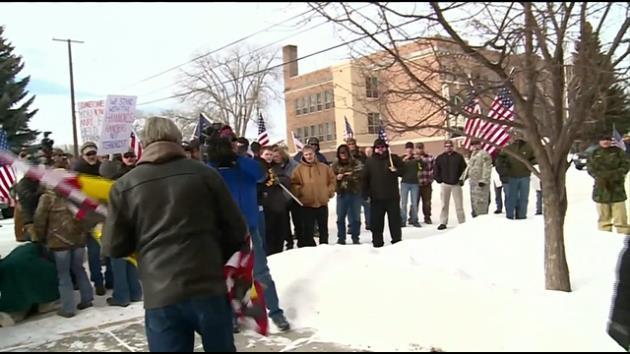 BURNS, Ore. (AP) — Surrounded by FBI agents in armored vehicles, the last four occupiers of a national wildlife refuge surrendered Thursday, and the leader of a 2014 standoff with federal authorities was criminally charged in federal court.

The holdouts were the last remnants of the group that seized the Malheur National Wildlife Refuge on Jan. 2 and demanded that the government turn over the land to locals and release two ranchers imprisoned for setting fires.

Meanwhile, Cliven Bundy, who was at the center of a 2014 standoff at his ranch in Nevada, was arrested late Wednesday in Portland after encouraging the Oregon occupiers not to give up. Bundy is the father of Ammon Bundy, the jailed leader of the most recent occupation.

On Thursday, the elder Bundy was charged in the 2014 standoff. Federal authorities may have feared Bundy’s presence would draw sympathizers to defend the holdouts.

A criminal complaint filed in U.S. District Court in Las Vegas charged the 69-year-old Bundy with conspiracy, assault on a federal officer, obstruction, weapons charges and other crimes. He’s accused of leading supporters who pointed military-style weapons at federal agents trying to enforce a court order to round up Bundy cattle from federal rangeland.

It was not immediately clear if he had a lawyer to represent him ahead of a court appearance in federal court in Portland.

Federal authorities say the Bundy family has not made payments toward a $1.1 million grazing fee and penalty bill.

The holdouts and 12 others connected with the occupation have been charged with conspiracy to interfere with federal workers.

A live stream of a telephone call indicated that the last four occupiers had surrendered Thursday morning.

In the live stream, Fry said the three others had surrendered but he refused to. He later said he was giving up. The FBI did not immediately confirm that the three surrendered.

The FBI began moving in on the holdouts Wednesday evening, surrounding their encampment with armored vehicles.Over the next several hours, the occupiers’ panic and their negotiation with FBI agents could be heard live on the Internet, broadcast by a sympathizer of the occupiers who established phone contact with them.

Fry, an Ohio resident, said he was declaring war against the federal government.

"Liberty or death, I take that stance," he declared and later said he was pointing a gun at his head.

Fry could be heard yelling at an FBI negotiator: "You’re going to hell. Kill me. Get it over with."

The occupiers calmed down after a while, and arrangements were made for them to surrender at an FBI checkpoint on Thursday.

A Nevada lawmaker has been key in getting that agreement. Michele Fiore is also a friend of the Bundy family. She came to Portland on Wednesday to show support for Ammon Bundy. When she heard the FBI had surrounded the refuge, she called into the online talk show to try to calm down the occupiers.

Fiore rushed to Burns to help negotiate a peaceful surrender of the occupiers.

The Oregon standoff began Jan. 2 when Ammon Bundy and his followers took over the refuge south of Burns to protest prison terms for two local ranchers accused of setting fires on federal lands, and to demand that the refuge be handed over to local residents.

Federal agents, Oregon state troopers and sheriff’s deputies monitored the occupation to avoid a confrontation. There were growing calls for the FBI to act, including from Oregon’s governor.

They did, on Jan. 26. On that day, Ammon Bundy and other occupation leaders were heading for the town of John Day to give a talk on federal overreach. FBI agents and Oregon state troopers stopped the group’s two-vehicle convoy. Robert "LaVoy" Finicum was shot dead in that confrontation. The FBI says he was going for a pistol inside his jacket pocket. Ammon Bundy and four others were arrested.

Greg Bretzing, special agent in charge of the FBI in Oregon, said Wednesday night that the situation had reached a point where it "became necessary to take action" to ensure the safety of all involved.

One of the occupiers rode an ATV outside "the barricades established by the militia" at the refuge, Bretzing said in a statement. When FBI agents tried to approach the driver, Fry said he quickly returned to the camp.

The FBI placed agents at barricades around the occupiers’ camp, Bretzing said.

"It has never been the FBI’s desire to engage these armed occupiers in any way other than through dialogue," he said. "And to that end, the FBI has negotiated with patience and restraint in an effort to resolve the situation peacefully."