Knock down a drone? 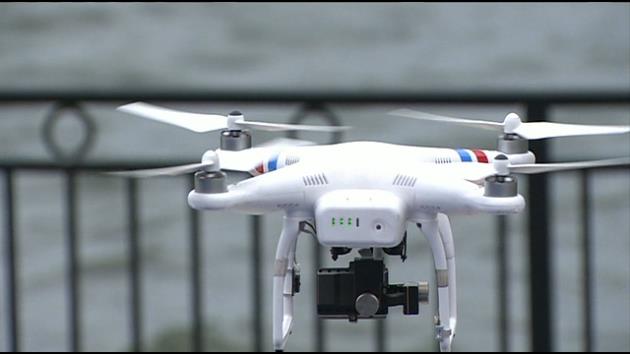 There is a lot of talk about drones. Police are using them, the military uses them and now you can buy one to fly around. But one South Florida woman says a drone buzzed over girls at a private pool, taking pictures of them. So can she knock the drone down? It’s why she called Help Me Howard with Patrick Fraser.

WSVN — If you have never been around a drone, they’re fascinating to watch, fun to fly, and if you are being targeted by one, infuriating.

Olga Hernandez: “We realized there was a bee. Sounded like a bee.”

Olga Hernandez was at her condo pool with one of her granddaughters, something she loves to do.

Olga Hernandez: “Oh yeah, I love being with them. Every chance I get.”

Patrick Fraser: “So you are a fun grandmother?”

But that sound she heard at the pool was not a swarm of bees…it was a drone.

Olga Hernandez: “When we first see it, it’s right over our heads. In the pool maybe eight feet above us. It was that close.

Patrick Fraser: “You could have knocked it down.”

Olga Hernandez: “Oh for sure. I could have thrown a towel to it.”

Olga took pictures of the drone. The same make and model as this drone with a video camera attached.

Olga Hernandez: “They were definitely taking pictures of the people that were there.”

Olga, her 12-year-old granddaughter and a few women were in bathing suits. The drone hovered over them.

Olga Hernandez: “It starts spinning like this and you can see it’s actually taking pictures. They were facing the camera to where I was, my granddaughter was, the little girl was, and those two girls that were laying there getting sun. It was chasing us, you know, Mr. Fraser it was chasing us.”

This drone is owned by Chris Eme who showed us its flying and videotaping capabilities.

Since Olga didn’t see anyone controlling the drone at her pool, Chris says that means the operator had a monitor.

Chris Eme: “Definitely had a monitor, yeah. Without a monitor you are only line of sight. The capabilities of a monitor allow you to stay in your living room and fly over someone’s home.”

Olga says the girls either got out of the pool and covered up or left because they were so uncomfortable with the drone videotaping them.

Olga Hernandez: “I don’t know what these people were going to do with these pictures.”

Since it was close enough to hit with a towel, Olga called the Sunny Isles police where she was told she was not allowed to knock the drone out of the air and she should just go inside.

Olga says the drone then flew to the edge of her building and headed North out of sight, leaving her with lots of concerns and questions.

Olga Hernandez: “Whoever was doing it, why they were doing it, I don’t know.”

Well Howard, people were at their condo pool on private property when a drone showed up apparently to videotape the girls at the pool, is that legal?

Howard Finkelstein: “The laws regarding drones are being written as we speak but as of today, the FAA can stop someone from flying recklessly and if one hovers over your property taking pictures, you can sue them for invading your privacy.”

The FAA can propose enforcement action, possibly including a fine, against someone who operates an unmanned aircraft in a “careless and reckless” manner, i.e., endangering the safety of other aircraft or people and property on the ground.

If your viewer felt she and her granddaughter were in danger because the UAS was so close, she may want to report the incident to the FAA office in Hollywood.

Howard Finkelstein: “One major problem is finding out who owns the drone. One way to do it is to knock it down and wait for them to come claim it. Now if it’s close enough for you to grab or hit with a towel or bat, that’s not a crime and I don’t think you would have to pay if you damaged the drone because it was so close and on your property.”

Good news for Olga, who now knows what she will do if the drone returns.

Olga Hernandez: “I am going to knock it down. Let them take me to court. I am not going to worry about having my picture or my granddaughters picture or these other little girls pictures out there. I don’t know what they are doing with those pictures.”

And while you can knock a drone down with a towel or baseball bat if it’s too close to you and you feel it’s endangering you, if it’s 100 feet in the air and irritating you, it’s against the law to shoot it down. Shooting it out of the air is considered a crime.

Flying around looking for a solution to your problem? Wanna touch down with the people who can help? Contact us. We won’t drone on, just buzz in to land a solution for you.