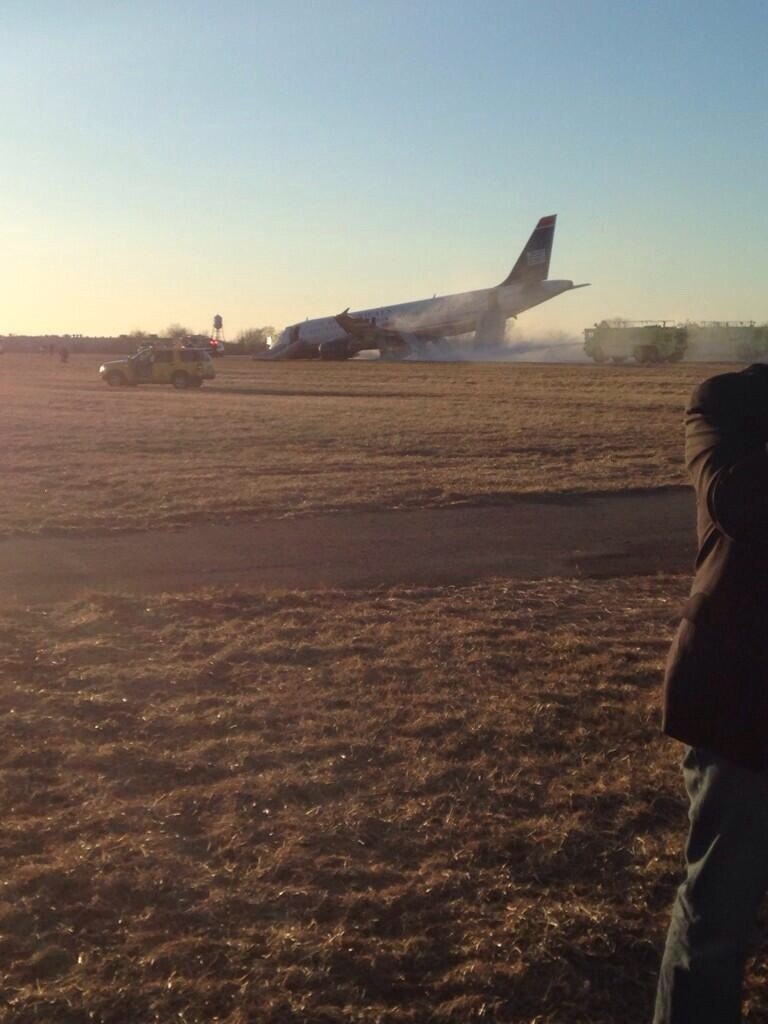 PHILADELPHIA (AP) — A Florida-bound plane’s nose gear collapsed during an attempted takeoff at Philadelphia International Airport on Thursday, leaving the plane crippled on the runway and prompting the crew to deploy emergency slides for the passengers to get off.

US Airways Flight 1702 was heading to Fort Lauderdale, Fla., when the pilot was forced to abort takeoff shortly after 6 p.m. when a tire on the plane’s front landing gear blew out, airline officials said.

The Airbus A320 jet was carrying 149 passengers and five crew members, airport spokeswoman Victoria Lupica said. All the passengers were rescheduled on later flights, she said.

Two passengers requested medical attention after the aborted takeoff, but no serious injuries were reported, she said.

A passenger on the plane, Dennis Fee, told WPVI-TV that it was “very windy and when the plane took off, the nose of the plane went back down, hitting the runway.”

“We were airborne, then struck back down by the nose,” he said.

Another passenger, Christopher Teaney, told the Philadelphia Inquirer the plane “kind of shot up and then bounced down.”

“Bounced real hard,” he said. “Shot up again, and then nose-dived.”

Emergency responders sprayed protective foam around parts of the plane because hydraulic fluid was leaking from it, but no jet fuel leaked, said police, who praised the actions of the airline crew for getting the passengers off the plane safely.

Teaney said that passengers had to wait more than half an hour in the cold for buses to pick them up and take them back to the terminal. Police said they erected barriers to try to shield the passengers from the wind and put some women and children in their vehicles to keep them warm.

The airport’s four runways were shut down for about 35 minutes, police said. Three were reopened within a few hours of the accident, with only the runway where the accident occurred remaining closed, Lupica said.