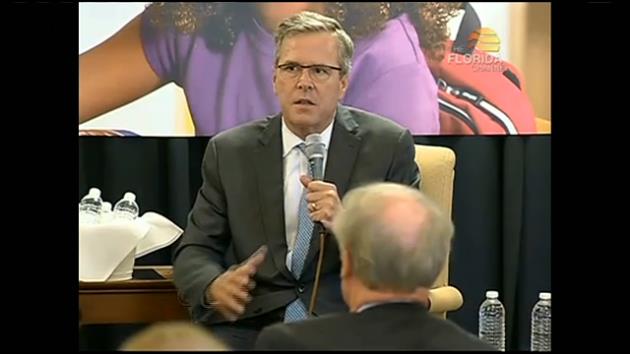 COLUMBIA, S.C. (AP) — Republican presidential hopefuls eventually will have to start running against each other. But, for now, many are content to run against President Barack Obama, Iran and Middle East extremists.

At the South Carolina Republican convention on Saturday, Jeb Bush, the former Florida governor, called the president’s international stewardship “an unmitigated disaster. Former Pennsylvania Sen. Rick Santorum called Obama “weak.” Rick Perry, Texas’ former governor, blasted “vacillation” by the administration. Sen. Lindsey Graham of South Carolina called the president “feckless” on the world stage. And Graham and Sen. Ted Cruz of Texas echoed each other as they accused Obama of “leading from behind.”

All five pledged loyalty to Israel and expressed varying levels of disdain for Iran.

The rhetoric — similar to what other potential GOP nominees are saying in early voting states — plays well at GOP venues where Obama is a reviled figure: the audience whooped, hollers and occasionally shouted “Amen” in response to the candidates. The approach also allows potential Republican nominees an easy transition into attacking former Secretary of State Hillary Rodham Clinton, the favorite for the Democratic nomination.

“Hillary Clinton is not going to be the person to lead us to a more stable future,” Bush said. “She has her fingerprints on all these foreign policy disasters.”

The question, eight months before voters in Iowa, New Hampshire and South Carolina start the nomination process, is whether any candidate can use promises of an aggressive foreign policy to distinguish themselves in a crowded field.

They certainly tried, as they spoke over two days to hundreds of activists who will help shape the primary outcome here. Several couched their pitches in religion, particularly in their condemnation of the Islamic State group.

“The great issue of our time is a battle between western values of freedom and this totalitarian world view of Islamic fanatics,” Perry said.

Graham, at a breakfast he hosted for delegates, said, “They want to purify their religion and they want to destroy ours.”

Santorum went further, noting the public killings broadcast by Islamic State militants. “This is not a modern Islam,” he said. “It’s a 7th century Islam. So I have a suggestion: Let’s bomb them back to the 7th century.”

Bush didn’t explicitly mention religion but played up his support for Israel, which many conservative American Christians view as the modern inheritors of the Old Testament covenant between the Judeo-Christian God and the ancient Israelites.

“The basic policy should be our friends know we have their back over the long haul, and our enemies need to fear us again,” Bush said.

Graham, the home-state senator who has surprised many local supporters by considering a presidential bid, argued that the distinguishing component of the GOP’s foreign policy discussions will be experience and past leadership.

He noted that he was an outspoken proponent of the troop surge in Iraq under President George W. Bush and that he criticized troop reductions in the region under Obama, saying the president was “fulfilling a political promise that never made sense.”

“I’ve been to Afghanistan 23 times since 9/11,” Graham said, adding that he would “listen to the commanders on the ground” rather than “pollsters.”

Already having clashed with Kentucky Sen. Rand Paul, who takes a more skeptical view of American involvement abroad, Graham said he will continue pushing an aggressive, specific foreign and military policy debate within the party. He stopped short, however, of saying that the governors and former governors in the race are too inexperienced in world affairs.

Florida Sen. Marco Rubio, who has already launched his formal campaign, had created a stir in recent days when he told the Des Moines (Iowa) Register that governors can “read about foreign policy” but aren’t as actively engaged in it as senators.