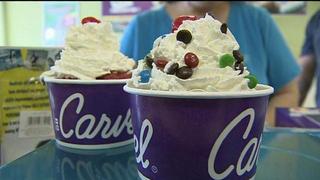 WSVN — The thought of a nice ice cream cone or a cup of ice cream covered with sprinkles will make your mouth water. And if you are going to buy ice cream, Ike Chang knows which one to chose.

Ike Chang: “Well to be very honest without any exaggeration, I am telling you the real facts Carvel has got the best. I repeat the best ice cream in the whole country.”

Ike’s favorite is no surprise a year ago he opened this Carvel ice cream shop in Davie on Sterling Road. A tasty business .. a tough business.

With money tight, Ike watches his spending which is why this letter from the City of Davie bothers him.

Ike Chang: “It makes no sense at all.”

The Town of Davie sent Ike a bill for his annual occupational license that was $67. Then they billed him $80.41 for take out and delivery service.

Ike paid the $67 for the occupational license. Then convinced Davie was making a mistake, sent the city a letter saying his customers didn’t order take out and he didn’t deliver.

Ike Chang: “I sent them this letter with the hope they would solve my problem, they did not help me.”

In fact, Ike says the city didn’t even respond but then a company from Maryland that does the billing for Davie, sent him another letter and instead of subtracting the $67 he had paid, added it to the amount. Meaning he now owed $214 they then included a warning.

Ike Chang: “They told me they are going to turn over my paper to the collection agency and there will be additional delinquent fees and finance charges.”

The guy who works in his ice cream store, seven days a week, by himself to pay his bills is fighting City Hall and not only losing, falling further behind.

Ike doesn’t deliver ice cream, but the city sends a letter saying he has to pay for delivery service. Howard, is that legal?

Howard Finkelstein: “No they cannot force you to pay for something you don’t do. But when you dig deeper legally they can charge Ike.”

That’s because its a tax. I spoke to the Town of Davie, they then sent a list of business taxes that they charge on page 14. The answer Ike thought he was being charged a delivery fee more clearly, its a take out and or delivery service tax. In other words, because people walk out of the ice cream store with ice cream, its considered take out. A city official then went to Ike’s store to explain the confusion. The city corrected the math error and Ike wrote the city the check for $80.41 so customers can take his ice cream and walk out of the store.

It’s not a fee for deliveries, it’s a tax on take out. But Ike says either way it should go away.

Ike Chang: “Because the economy is bad and everybody is suffering. I am talking in general every small business is suffering.”

Patrick Fraser: “Trying to get a government agency to drop a tax? Good luck with that Ike. And when Ike pays that tax, is the city required to provide something? No, just the permission to operate. Welcome to the American way.”

Problems giving you a licking? Tired of getting an icy reception? Contact us, we will try to come up with the scoop and lave a nice taste in your mouth.