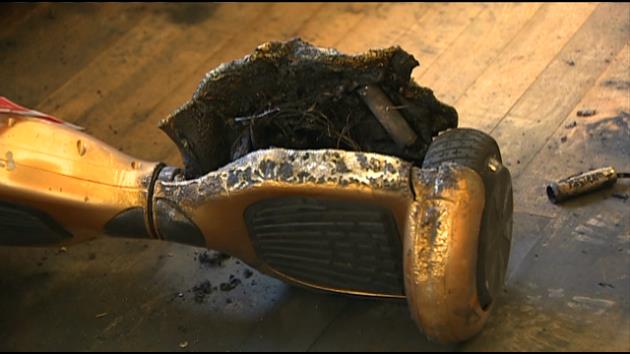 The explosion caused damage to the family’s couch and left burn marks on their wooden floor. Shortly after the fire erupted, the family was able to extinguish it.

The family said that they are thankful no one was riding the toy. "It was like a big boom, so came in, see what’s going on. The hoverboard just caught on fire," said Rodney Davis, whose stepson’s hoverboard exploded.

Hoverboards are supposed to be a fun way to get around, but the toy can be dangerous. Now, one Fort Lauderdale family has seen the danger firsthand after they said their 10-year-old’s hoverboard suddenly burst into flames. "I saw it on fire, I came back in the house and threw water on it," Davis said.

It was the first time fire rescue said they were called to a scene for a hoverboard incident. "One of the things we are urging is that our residents do use caution with hoverboards," said Fort Lauderdale Fire Rescue Capt. Gregory May.

Davis explained that the toy wasn’t in use or even plugged in at the time of the explosion. "Happy they was in school, so good no child was there," he said.

This incident comes just two months after the Consumer Product Safety Commission (CPSC) announced that most of the hoverboards on the market are not safe by their new standards. At least 50 other cases across the country involving these devices exploding have been reported to them.

Davis said that while another hoverboard they have at the home works, he’s throwing it out and believes other parents should do so as well. "We getting rid of them," he said. "We don’t need them down here no more."

If these toy manufactures don’t follow the safety commission’s new regulations a recall on these toys could happen.

For more information on hoverboards from the CPSC, visit this link.