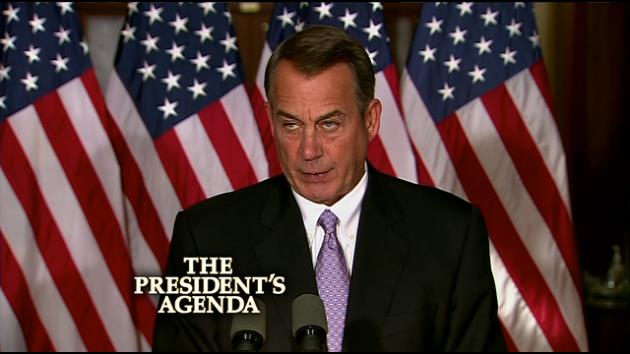 Democrats said Obama had acted legally and mocked the case as an unwinnable, politically motivated attack. Legal experts expressed doubts that the GOP would prevail or that the case could be concluded during Obama’s presidency.

The suit echoed Republican complaints over Obama’s Thursday night announcement of executive orders preventing the deportation of 5 million people who immigrated to the U.S. illegally. GOP lawmakers said those unilateral actions were unconstitutional and have promised unspecified congressional action.

Friday’s lawsuit did not address immigration. A Republican official said party leaders might amend the suit to include Obama’s immigration actions, which would require approval by the GOP-run House. The official spoke on condition of anonymity to describe internal Republican deliberations.

In a written statement, House Speaker John Boehner, R-Ohio, said Obama “has chosen to ignore the will of the American people” and cast the battle as one with important implications.

“If this president can get away with making his own laws, future presidents will have the ability to as well,” said Boehner. “The House has an obligation to stand up for the Constitution.”

Asked about the lawsuit, White House spokesman Eric Schultz said, “At a time where we, I think, the American people want Washington focused on jobs and the economy, the House Republicans choose to sue us, sue the president for doing his job.”

House Minority Leader Nancy Pelosi, D-Calif., called the lawsuit “a bald-faced attempt to achieve what Republicans have been unable to achieve through the political process.” Her written statement added, “Republicans are prioritizing the special interests and the howls of impeachment-hungry extremists before the needs of the nation.”

Pelosi also said Republicans found “a TV lawyer to file their meritless lawsuit” and criticized them for its cost to taxpayers – at what the contract said would be $500 hourly. The lead attorney is George Washington University law professor Jonathan Turley, who has done legal commentary on television networks.

Friday’s lawsuit said that despite constitutional strictures, “the administration repeatedly has abused its power by using executive action as a substitute for legislation.”

In the past, Republicans have accused Obama of overreaching by trading five Taliban prisoners for captured Army Sergeant Bowe Bergdahl and blocking earlier deportations of immigrant children illegally in the country.

Congressional Republicans have all opposed the health care overhaul and the House has voted over 50 times to repeal it.

Friday’s suit was filed against the departments of Health and Human Services and the Treasury. It was assigned to U.S. District Judge Rosemary M. Collyer, a 2003 appointee of President George W. Bush.

It accuses Obama of unlawfully delaying the 2010 health care law’s requirement that many employers provide health care coverage for their workers.

That so-called employer mandate requires companies with 50 or more employees working at least 30 hours weekly to offer health care coverage or pay fines. Businesses with fewer than 50 workers are exempt.

The requirement was initially to take effect this year. Now, companies with 50 to 99 employees have until 2016 to comply while bigger companies have until next year.

The suit also accuses Obama of illegally preparing to make an estimated $175 billion in payments over the next decade – plus $3 billion paid out this past year – to insurance companies, even though Congress hasn’t provided money for that purpose.

According to the suit, insurance companies offering coverage under the health law are supposed to offer reduced rates to many lower-income policyholders.

The law established a fund to reimburse insurers for some of those lower rates. Congress hasn’t put any money into that fund but the administration has started making payments to insurance companies anyway, the suit says.

University of Richmond law professor Carl Tobias said it would be difficult for the House to prove its case or even get the courts to hear it because of their traditional reluctance to intervene in political disputes between Congress and the president.

Timothy Lewis, a former judge in the 3rd U.S. Circuit Court of Appeals who was nominated by President George H.W. Bush, said that existing caseloads and potential appeals make it doubtful the case would be finished during Obama’s final 26 months in office.

The House authorized the lawsuit in a near party-line vote in July.