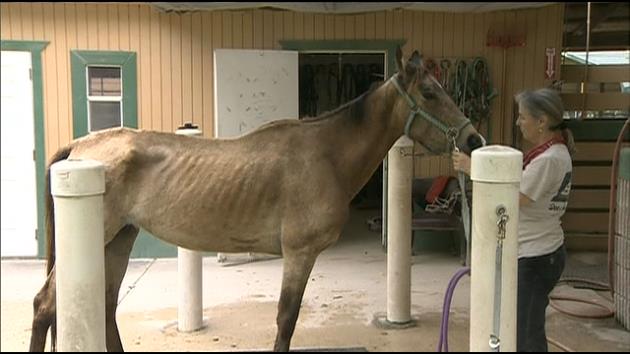 SOUTHWEST MIAMI-DADE, Fla. (WSVN) — Several horses are on the road to recovery in Southwest Miami-Dade after they were found abandoned and in poor physical condition.

In less than two weeks, 11 horses were discovered abused or abandoned by the Miami-Dade Agriculture Patrol in South Florida. Each one of the horses were starving and in critical condition.

Three of the most recent rescues, found Saturday in the C-9 Basin off Okeechobee Road in Northwest Miami-Dade, were the latest to be brought in to a ranch run by the South Florida Society for the Prevention of Cruelty to Animals in Southwest Miami-Dade. "It’s always unbelievable to me that people could just watch these animals get to this state and not do anything about it," veterinarian Dr. Carla Munoz said.

Munoz could been seen vaccinating the horses Monday morning. "To be properly fed, their grain, their hay," she said.

"Driving by yesterday, this is one of the horses that they came across," said Laurie Waggoner, South Florida SPCA’s director of ranch operations, as she showed 7News one of the emaciated animals.

"He’s got long, overgrown hair that’s just falling out. You can see his spine," she said. "You can see, you know, all the skeletal structure of him … looks like he hasn’t had good food or enough good food in a very long time."

Sadly, Waggoner said, this horse’s current situation is all too common in South Florida. "This is what happens when people don’t know what the costs associated with keeping a horse are," she said.

Over the past week alone, the South Florida SPCA has taken in 10 horses. One of them was so malnourished that she had to be put down. "She couldn’t walk. She couldn’t get up or down," said Waggoner.

Waggoner showed 7News other horses found in similar condition. "This horse here, he was picked up Tuesday from the same area," she said.

Pointing at another horse, Waggoner said, "This is one that was picked up about six weeks ago," she said.

They’re different ages and breeds, but they’ve all suffered the same fate.

Currently, 53 rescued horses are staying at the South Florida SPCA ranch. While the newest additions rehabilitate and recover, authorities continue searching for their owners.

Waggoner had an important message for anyone who comes across abandoned horses or witnesses horses being mistreated or neglected. "If you see something like this that’s going on, report it," she said, "and don’t let these animals suffer like this."

The three horses are expected to make a fully recovery and will be put up for adoption. As of right now, there are 40 additional horses also available for adoption.

For more information on the South Florida SPCA, go to www.spca-sofla.org.