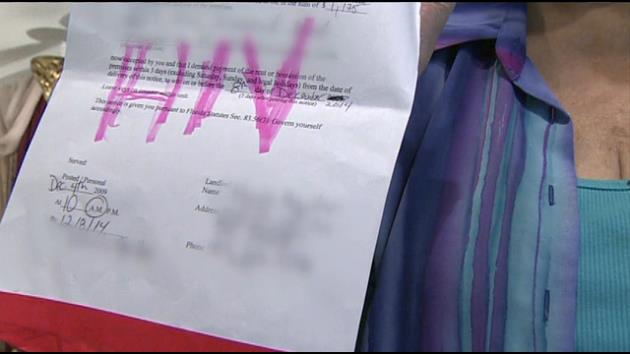 WSVN — She had a problem she didn’t tell many people about: that she had HIV. Then she came home one day and found the letters plastered on her house. Can someone do that to you if you have medical condition? It’s why one woman called Help Me Howard with Patrick Fraser.

For 11 months, Julia Brooks and her brother got along well with their landlord.

Then in December, everything changed.

Julia Brooks: “For him to walk in and sit down on a chair and immediately tell me — ordered me out of this house by the end of this month. ‘I’m evicting you.'”

Julia asked the landlord why. He wouldn’t answer. Then she brought up her lease.

Julia Brooks: “I said, ‘You can’t evict me. I have a lease.’ He said, ‘Does not matter. I’m releasing you from the lease.’ And he was so belligerent and frightening. He actually scared me. I had to get up and leave. He was just shouting at me.”

Then an eviction notice was posted on her door and window by the landlord’s daughter.

Julia Brooks: “Eviction papers, three-day papers. And she had written HIV in very bold letters across all of them.”

In 2008, Julia was seriously ill and in a coma for five days. She assumes she had a blood transfusion. She thinks that’s how she contracted HIV, and seeing this brought back that devastating meeting with her doctor.

Julia Brooks: “No way in the world I can have HIV. I have been celibate for nine years and I have never done drugs. There is no way I can have this disease. ‘Well, I’m sorry but you tested positive.'”

Julia only told her family and close friends she has HIV. She never told her landlord or his daughter and has no idea if they did this, how they found out.

Disappointed and devastated to come home and see this on the front of her rental for all her neighbors to see.

Julia Brooks: “This was so degrading to come see at the door. I was so angry. I cried for two days.”

Well Howard, someone posted “HIV” on Julia’s front door. Is it legal to do that?

Howard Finkelstein: “No, it is not. It’s called an invasion of privacy, because it’s illegal to publish private facts that a reasonable person would find highly offensive and embarrassing. If you do that to someone, you can be sued and have to pay damages.”

We asked the landlord’s daughter why they were evicting Julia. She says because Julia told them she was not paying the December rent. But Julia has this receipt showing the rent was paid on Dec. 9.

The landlord can evict Julia when her lease expires, but Howard says not because of HIV.

Howard Finkelstein: “You cannot disclose someone’s medical disability, and you cannot try to evict them or refuse to rent or sell to them because of that condition. That’s a violation of federal and state fair housing laws. If it happens to you, file a complaint with those agencies.”

The landlord doesn’t have to evict Julia. She wants to leave and is now looking for a new place, probably leaving you with the obvious question: If Julia tried to keep her HIV a secret from so many people, why talk about it with Help Me Howard?

Julia Brooks: “I’m very humiliated. I’m doing this interview to admit I have HIV, but it is so important for people to get tested.”

She is worried going public could cause her embarrassment, but she is doing it to make other people aware of HIV. Julia is a classy, brave lady. Now, she is trying to move but doesn’t have a place yet. She is looking.

And Howard mentioned filing a complaint over housing. If you believe you have been the victim of illegal discrimination, not just from HIV but race, religion, on and on, the link is below.

Ready to disclose a problem you have kept secret? You don’t have to write it out? You can also call us to let us evict your headache and give you a new lease on life.