Appliance Breaks Again and Again and…

(WSVN) - They bought a beautiful new appliance … that broke again and again and again. When they asked for a new refrigerator, they were told, “Nope, we will keep fixing it.” So their question: Does the manufacturer have to give up and replace the appliance? It’s why they called Help Me Howard with Patrick Fraser.

People spend a lot of time in their kitchen. That’s why the Balascos decided to completely remodel theirs, including new appliances.

Mark Balasco: “The appliances in the kitchen itself were gorgeous. Everything turned out beautiful. I loved it. I loved everything.”

The kitchen was finished in November 2015. One of the last things to go in was a $2,000 stainless steel refrigerator and freezer.

Mark Balasco: “It had all kind of little bells and whistles that we liked.”

Mark Balasco: “Six days after the installation, the refrigerator, freezer, everything went down.”

A repairman said there was a power problem and fixed it. Then…

Those repairs were made.

And it broke again.

Mark Balasco: “Well, when they replaced the part, it broke again.”

Mark Balasco: “And then they would come back in two weeks and say something else broke.”

Meaning every few weeks, Mark and Amy’s food would spoil, and they would go without a refrigerator or freezer.

Mark Balasco: “Every time they come to diagnose it, they’d say, ‘We will be back with the part when we get it.’ That takes one or two weeks. In the meantime, we’re waiting with no refrigerator or freezer.”

Mark has the paperwork from each service call. Enough to fill the table, enough to give him indigestion.

And so, the next time it broke, instead of calling the repair company, Mark called the manufacturer.

Mark Balasco: “I would argue, ‘They’ve been out here five, six, seven, eight times now. This is ridiculous. It’s time for a new one.’ They would not budge. They would always say, ‘We will send the tech out to fix the problem.'”

Since it kept breaking, the manufacturer did extend the warranty six months, but problems kept popping up. The day we were there, the freezer wasn’t freezing, just cooling, leaving Mark steaming.

Well, Howard, the manufacturer says they want to keep repairing it. Mark says he wants a new one. What does the law say?

Frigidaire is a subsidiary of Electrolux. I contacted them.

A few days later, I got an email saying, “We are pleased to have been able to resolve the situation, and appreciate you bringing it to our attention.”

The Balascos got this delivered to their home. 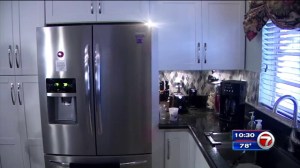 Howard Finkelstein: “In many cases, it’s less expensive for the manufacturer to keep repairing it rather than replace it. If you want a new one instead, keep pestering them. Go up the corporate ladder. Don’t give up.”

Mark Balasco: “We finally got the refrigerator delivered.”

A brand-new refrigerator for Mark and Amy … that works wonderfully.

Mark Balasco: “From the bottom of our hearts, we can only thank Help Me Howard and Patrick Fraser for their generosity and the work that they did in helping us get this.”

Glad we could help. Now, if your appliance breaks, the manufacturer or their service company usually has to repair the appliance if it’s still covered under the warranty, so hang on to that warranty and hope if something goes wrong, it happens before the warranty expires.

Frozen out trying to resolve a problem? Don’t start steaming. Chill, cool off and let us crank up the temperature on them.