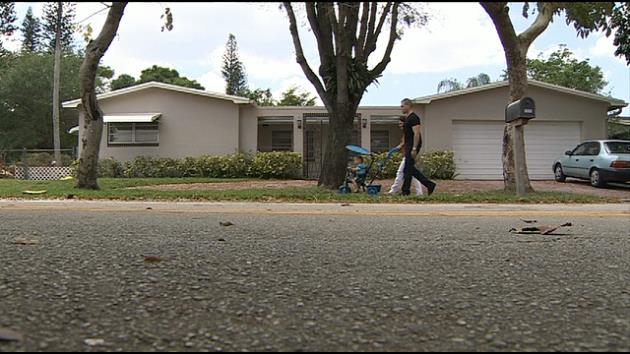 WSVN — It was the couple’s first home, a dream come true, and then they met their next-door neighbor, who has called the police on them more than 20 times and then tried to block them from even coming to their own house. What can they do? Call Help Me Howard with Patrick Fraser.

When Danny and Amber were looking for a home, one Pembroke Pines neighborhood seemed perfect.

The day they bought their house, they met their next-door neighbor.

Daniel Defino: “Screaming, yelling, spit flying, pretty much attacking us within 15 minutes of owning this home.”

The neighbor was upset because Danny was clearing shrubs off his own property and cutting branches hanging over his yard.

Patrick Fraser: “So he called the cops because you trimmed the trees hanging on your side?”

The neighbor called the cops that day, and police records show, over the past two years, he has called them dozens of times.

Danny says none of it was true, and the day before we came out, Danny was putting up a fence. The neighbor saw a shovelful of dirt had fallen on his property.

Daniel Defino: “He’s called the authorities three times in one week, stating that I’ve been throwing dirt onto his yard.”

Danny says every time police come and knock on his door, it’s the same thing.

Daniel Defino: “The cops apologize to us. They say they are glad they are not us, they are sorry we have to live next to them.”

We walked over to talk to Robert Sweeney. He was home but would not answer the door, and Danny says Sweeney’s behavior is starting to frighten his wife.

Daniel Defino: “A week ago he came to the front door, banging on the front door, threatening my wife, calling me outside as if we had to have some sort of physical confrontation.”

Well, Howard, your neighbor calls the police on you over and over for no reason. Legally, do you have to put up with it?

Howard Finkelstein: “You can’t stop your neighbor from calling the cops, but with so many false allegations, the police can charge Danny’s neighbor with filing false police reports, which is a crime.”

We then saw Danny’s neighbor when he came to court to ask a Broward judge to give him a restraining order that would block Danny from coming into his own home.

Judge Tim Bailey: “What did he do? What did the gentleman do that you think amounts to violence?”

Sweeney had no examples of violence for Judge Tim Bailey, but complained that Danny had installed security cameras and pointed them at Sweeney’s house.

He also claimed Danny said the devil was nearby when he saw Sweeney’s wife at the grocery store.

Robert Sweeney: “Scared the crap of her. As he passed, he said, ‘Oh, don’t worry, I will call the police.’ That’s what he said to her. He didn’t call the police. I did.”

When Danny got to talk, he denied calling her the devil and summed up his feelings.

Daniel Defino: “If anything, I should be the one asking for a restraining order.”

Judge Bailey made his decision..

Outside, I tried to ask Mr. Sweeney about his request to block Danny from coming to his own home.

Robert Sweeney: “I think this is a circus, and I really don’t want to be on TV.”

Danny was victorious in blocking the restraining order, but tired of the aggravation.

Daniel Defino: “I hope there’s a way for me to seek damages for the harassment that me and my wife have repeatedly encountered.”

Howard Finkelstein: “Yes, there is a way. The law calls it abuse of process, or malicious prosecution, which would allow Danny to get money for any losses caused by his neighbor’s misuse of the legal process.”

Sweeney has called the police on Danny dozens of times for no reason. He wonders what will happen next.

Daniel Defino: “I am fearful that his response to what occurred today could be violent.”

Not feeling neighborly after some arresting developments? Restrain yourself and file a report with us. You don’t have to worry about any charges. We’re free.