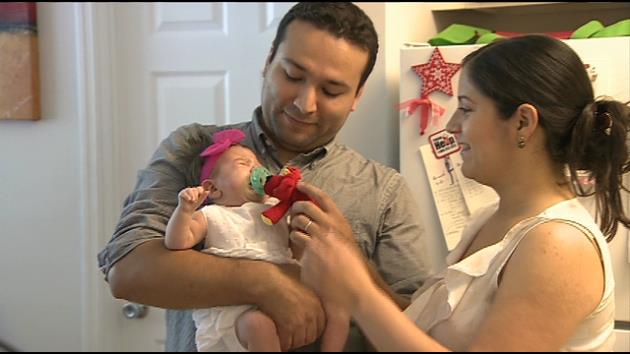 WSVN — It was supposed to be one of the happiest days for a couple. But when their newborn daughter got sick, they didn’t know if they would ever bring her home. 7’s Danielle Knox shows us how this family received the greatest gift this holiday.

Maria and her husband, Andres, welcomed baby Amelia into the world on Oct. 28.

But just one hour later, Amelia was having trouble breathing and was sent to neonatal intensive care.

Maria Gomez: “The doctor came to my room to inform me that Amelia wasn’t doing very well. They had already done everything they could do for her.”

The doctor said their daughter needed to be transferred to Miami Children’s Hospital right away.

Maria Gomez: “She was completely blue, to the point where I did not think they were going to be able to pick her up, that they were not going to have enough time.”

Andres Vivas: “When you see her like that, it’s tough.”

Amelia was rushed to the pediatric intensive care unit, where they put her on an ECMO machine, which provides life-support for the sickest babies.

Dr. Alex Koetzle: “ECMO is a bypass of the blood that goes into this machine to oxygenate it artificially and then gets shifted back to the baby so we can keep that baby in a stable condition.”

Amelia was on the ECMO machine for four days. Doctors had to make sure she couldn’t move at all during that time.

Dr. Alex Koetzle: “This is the type of baby that is so sick they don’t need to be touched, they should not be touched. So we want to completely sedate them. We want to paralyze them. So we give them medication so they can’t move at all.”

She was moved to the NICU and put on a ventilator because she still couldn’t breathe on her own.

Maria Gomez: “There’s not really much that we could do to help her at that time.”

And the worst part was they couldn’t even hold their baby.

Andres Vivas: “It was hard because you want to be close to your baby, give her support.”

Three weeks later, Maria walked in to find her baby breathing on her own!

Maria Gomez: “It was like the best surprise we could ever receive.”

Amelia had been weaned off all the machines that were keeping her alive.

Maria Gomez: “I was finally able to hold her for the first time since she was born.”

Now, home with mom and dad, Amelia is feeding normally and has made an amazing recovery.

Maria Gomez: “All the time she was fighting, we could see that she’s so little and so strong at the same time.”

Her parents say not only is Amelia their miracle baby, but truly the greatest gift they could receive this Christmas.

Maria Gomez: “We have no doubt that this is a miracle. We see the hand of God, clearly.”

Amelia is still under close watch by her doctors, but they said she is doing great and is a healthy baby girl.