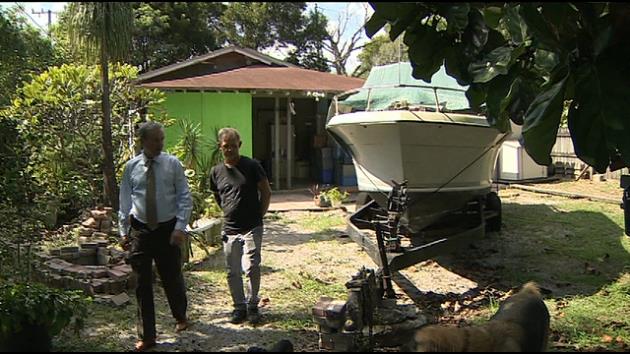 WSVN — His partner died, leaving a couple of boats and cars in his yard. Sounds simple, right? You have them removed. Oh, no. If someone leaves property in your yard, you can’t touch it, cant tow it. What can you do? It’s why we bring in Help Me Howard with Patrick Fraser.

Stepton and Robert were together for 20 years.

Stepton Duck: “We ran into each other at Winn-Dixie and been together ever since.”

They bought a house in Fort Lauderdale, built a life together, and then…

In March 2014, Robert Carricato died of a heart attack.

Stepton Duck: “I really do miss him.”

Losing Robert has been painful. Dealing with the property he left behind has been difficult.

Stepton got their house, but Robert didn’t have a will to handle his other property.

Legally, that meant they all belonged to Robert’s mother in Pittsburgh. The two boats…

Stepton Duck: “Yeah, the engine is good. It’s got a little cabin.”

Stepton Duck: “We took this all over the country.”

Stepton says Robert’s mother didn’t want to pay to ship them all to her in Pittsburgh, but didn’t want Stepton to have them, either.

Stepton Duck: “We just don’t see eye to eye on a lot of things, yes.”

Time has tarnished the once shiny cars and boats. Stepton would like to restore them and keep them for sentimental reasons, but he knows what Robert’s family would do.

Stepton Duck: “I dont trust them. They would sue me in a heartbeat if they saw money involved. I really do believe that.”

But he also says if he had all this towed away, they would also sue, leaving him stuck.

Stepton Duck: “I want to see it moved so I can take my property back.”

Well, Howard, Robert’s family won’t let Stepton have the boats and cars but won’t move them off his property, either. So legally, what should he do?

Howard Finkelstein: “To protect himself, Stepton needs to send the mother a certified letter telling her she has 30 days to get the cars and boats off his property or he will have them removed. If she doesn’t do that within 30 days, he then needs to call a licensed tow company to haul them away and put them in storage.”

I spoke to Robert’s mother in Pittsburgh. Audrey Carricato told me she would love to have her son’s property but couldn’t afford to transport it. She would not give it to Stepton, and she told me she would sue him if he moved the cars and boats.

Stepton then sent her the letter Howard suggested, giving her 30 days to get the cars and boats off his property. She never responded to the letter.

Howard Finkelstein: “The tow company that Stepton calls will take the vehicles to a storage area. They then have to notify Robert’s mother to come and get them. If she doesn’t, they can auction them off to collect the towing and storage fees. At that auction, Stepton can then bid on them if he wants to legally own them.”

Stepton Duck: “My choices are limited.”

Stepton will have to call a tow company and hope he finds a way to at least buy one or two items that belonged to his partner.

Stepton Duck: “I would like the stuff, but that’s not possible based on the legality of it all. Hopefully somebody will help.”

Now, to collect their towing and storage fees, by law, the towing company has to place an ad in a local newspaper, giving people notice of the auction. And at that auction, anyone can come an bid. Stepton will be there. We will be there, as well.

A problem dumped in your lap that you can’t haul away? Need the key to crank things up? That’s us, and we don’t need 30 days notice. One call or e-mail will get us going.