Former Miami-Dade mayor bonds out of jail, “I’ll have my day in court” 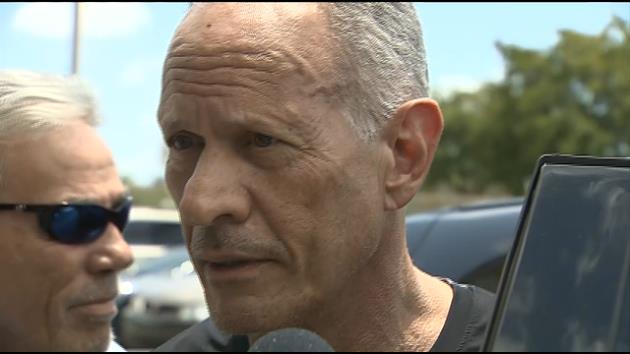 MIAMI (WSVN) — Former Miami-Dade Mayor Carlos Alvarez had a few words to share after bonding out of jail, Thursday.

Alvarez, who has been charged with misdemeanor battery for an alleged attack on his ex-girlfriend over the weekend spoke out Thursday afternoon, although he did not say much. "I’ll have my day in court," he said. "There’s two sides to every story; my side hasn’t been told."

He was then interrupted by his daughter, who ran up and embraced him.

After spending the night behind bars, Alvarez appeared in court in handcuffs and a jumpsuit, Thursday morning.

The judge set a bond of $1,500 for Alvarez and ordered him to stay away from his ex-girlfriend, Miami-Dade Police Lt. Evelyn Fernandez. Alvarez is denying all allegations against him — allegations that his former girlfriend tells 7News are true.

Fernandez had pictures taken by Coral Gables Police of her bruises that she accuses Alvarez of giving her, Saturday.

According to a sworn statement from her 16-year-old daughter, on April 23, Fernandez arrived to an apartment complex at 55 Merrick Way to return Alvarez’s cat. Upon arrival, she and Alvarez began to argue. Quickly, the argument escalated and Alvarez grabbed her by both arms, pinned her against the wall in the building’s parking garage and spit in her face.

Police confirmed her physical injuries were consistent with the sworn statement from the victim’s daughter.

Alvarez’s sister, Cristina Penedo, appeared in court and defended her brother. "I’m very upset about what’s going on," said Penedo. "My brother has always been a very gentle, loving brother, son, grandson, uncle, father. He’s always surrounded by women. He doesn’t allow anyone to even say something nasty in front of the girls. This is an injustice."

According to the Coral Gables Police Department, they arrested Alvarez after he turned himself in on Wednesday morning.

On the day Alvarez surrendered, Fernandez told 7News in a phone interview that she has been a repeat victim for years and that the verbal and physical abuse escalated in 2013, soon after Alvarez began a bodybuilding career.

After Alvarez bonded out, the former girlfriend said she is undergoing treatment for a second bout with cancer and was not up to speaking on camera.

A day earlier, however, she shared a text that, she said, Alvarez sent her on Saturday. It read, "I hope that you get the worst possible cancer and die a slow, miserable death, you evil [expletive]."

She texted back, "Thank you. I wish you the very best life has to offer you. May you live a long and happy life."

Alvarez’s sister spoke about the text message. "I couldn’t say if it’s true or not," she said. "I know that sometimes, in the heat of a fight, you say a lot of things that you really don’t mean. That’s why I don’t like to write things because they stay."

According to a 7News source, police investigated the case along with the State Attorney’s Office.

7News spoke to Fernandez via text message, and she said that a 2014 domestic disturbance, in which she was involved, took place in the same building as Saturday’s alleged incident.

The 2014 incident resulted in a child escaping the home. No statements were given, and no charges were filed.

Fernandez has confirmed that she was a part of the incident and has said that she has taken more extensive abuse from Alvarez since 2013.