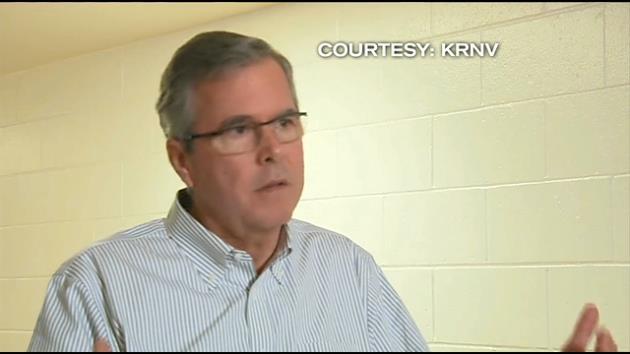 In a speech aimed at President Barack Obama's administration as well as his rivals for the GOP nomination, Bush called for limiting new hires in government and extending the ban on former members of Congress from lobbying their colleagues from two years to six years.

Bush also called for amending the U.S. Constitution to require a balanced budget and to give the president line-item veto power to challenge what he called "Mount Washington."

"The overspending, the overreaching, the arrogance, and the sheer incompetence in that city – these problems have been with us so long that they are sometimes accepted as facts of life," Bush said during a speech at Florida State University. "We need a president willing to challenge the whole culture in our nation's capital – and I mean to do it."

Bush gave his speech less than a mile from where he spent eight years as Florida's governor and he pointed repeatedly to his achievements during two terms in office as proof he would fulfill his promises.

Some of his remarks were aimed at fellow Republicans, including Sen. Marco Rubio, who is also running for president. Bush scolded members of Congress who miss votes and said they should forfeit their pay if they are absent. Rubio's missed votes have come under scrutiny recently.

"The reality is that Congress is in session for three days in a typical week anyway, so it's not asking too much that every member be there and work on those days," Bush said.

"What we have seen from Jeb Bush before, we will see again – greater income inequality, sky high debt, allegiances to lobbyists and a failed economic agenda that benefits the wealthy," said Christina Freundlich. "Bush may have an elevated sense of his record here – but those who are paying attention know better. "

When Bush became governor in 1999, Republicans controlled both houses of the Legislature and the governor's mansion for the first time in more than a century. Many GOP leaders, including current FSU President John Thrasher, were eager to work with him many initiatives, including an overhaul of the state's public school system. That effort remains contentious 15 years after it was put in place.

Bush noted that as governor he pushed through tax cuts and overhauled the state's civil service system. He cut taxes consistently while the state's economy tracked upward, in part due to a supercharged real estate market that collapsed after he left office. But overall state spending also rose during his administration.

If he's elected Bush said he would save money by implementing a freeze on new hiring and to replace only one person for every three federal workers that retire.

He also promised to crack down on the influence of lobbyists, noting that as governor he enacted a strict ban on gifts from lobbyists to legislators. He made his comments before an audience filled with many of his supporters and former aides who are now registered lobbyists. One of Bush's top advisers, Sally Bradshaw, is married to the founder of one of Tallahassee's most successful lobbying firms.

Bush's speech is the first in a series to lay out his domestic priorities. He'll also hold town hall-style meetings in South Carolina and New Hampshire later this week.