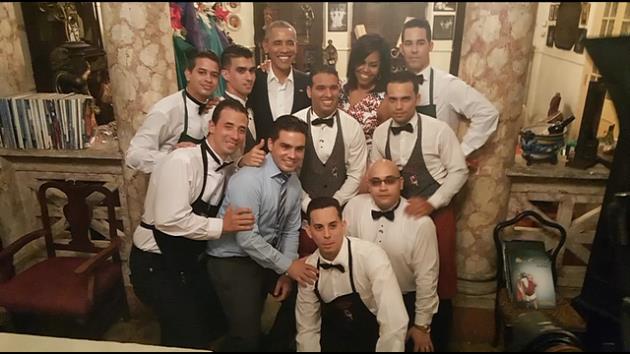 HAVANA (WSVN) — During his visit to Cuba, President Obama dined at an increasingly popular family-owned restaurant that works alongside the Cuban government.

Cuban families co-own restaurants with the government, known as "paladares," which are basically homes partially turned into restaurants. They are fairly new in the island nation, and were recently approved by the Cuban government.

President Obama is in Havana to talk about business and capitalism, and there is no doubt that this is one of the reasons he chose to visit the San Cristóbal Paladar.

A flood of Secret Service agents arrived outside the restaurant, cueing one waiter to get his best table ready for the U.S. president. "Then I said, ‘Well, hello, Mr. President. Good evening, I am Ray. I’m gonna be your waiter. I’m gonna be here assisting you,’" said Ray Mely, a waiter at San Cristóbal Paladar. "And he said, ‘Ray, it is an honor for us.’"

The president sat in a chair that was at eye level with a picture of Fidel Castro less than five feet away. The president, however, focused on the picture of two people who were next to Fidel: Jay-Z and Beyoncé. "I think I heard that Jay-Z came here and said, ‘Jay-Z came here first to check before me,’" Mely said.

Obama ordered "solomillo a la plancha," steak on the grill, medium-well with a side of vegetables. The Obama daughters ate steak and pork, and Michelle Obama had sliced steak and wine. The president, however, did not drink wine. "I offered it to him. ‘Mr. President, are you having this bottle of wine?’ and he told me, ‘No, no, I have to work tomorrow.’"

One dining room at the San Cristóbal Paladar used to be a bedroom. The family moved upstairs and converted the terrace into two bedrooms.

The government-authorized paladares started five years ago as a way for Cubans to make money. The owner said it was an opportunity to have their own business. "My house is big and my husband is a chef," said restaurant owner Rayla Perez through a translator.

Perez told 7News that she couldn’t imagine that what she started to try to make ends meet would draw celebrities and a president, who paid from his own wallet for dinner. His bill totaled about $80.

Owners of paladares have to pay a fee to the government to maintain the new business venture on the island.