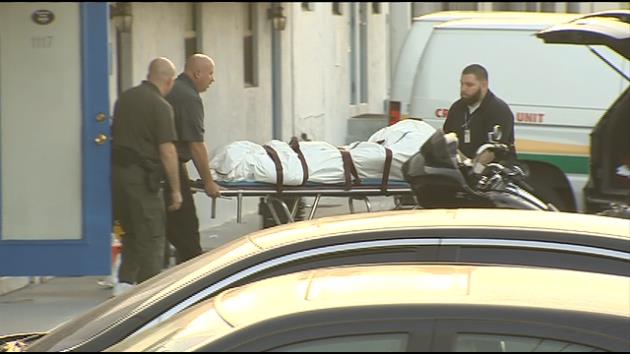 According to the Broward Sheriff’s Office, 25-year-old Hector D. Ferrer was outside of the motorcycle club, Top Gunz, near Interstate 95 and West McNab Road, when he was fatally shot by his friend, 30-year-old Roosevelt Francois.

Ferrer’s father, Hector Ferrer Sr., said he was a member of Top Gunz and visited the location frequently. He said Ferrer had just been talking to his friends about how great his life is, his plans on getting married, his baby girl who was on the way and about his great job when Francois went to his car, grabbed his gun and shot him, point-blank in the head, several times.

Francois had to be removed from his vehicle. "We got here, there was like 20 cop cars, and they were circling over by the canal over there," said one woman who lives nearby, "and then I watched them bring the guy off in a gurney and put him in the ambulance."

Francois was then transported to Broward Health North Medical Center in unknown condition where he was later arrested.

Ferrer’s family confirmed that Ferrer and the suspect were good friends, as close as "brothers," but Francois may have been suffering from depression, which led him to suddenly open fire in front of a crowd of people, "as if he snapped," said the relative. Both Francois and Ferrer were members of Top Gunz.

The deceased’s sister, Patricia Ferrer, spoke through tears how he had friends who were jealous of him. "He was very happy that he’s having a kid, he’s doing good in his job, he has someone by his side that loves him dearly, and a lot of his friends, unfortunately, were very jealous of him," she said. "Our family’s very devastated."

Ferrer’s father described his son as an overachiever and a great son. Ferrer was a mechanic for Mercedes-Benz. "My son was a good kid. A hard worker. He almost worked too much," he said, speaking in Spanish. "He was so happy right now, happy he was going to be a dad."

The president of the club and friend of Ferrer, "Supe," described the tragedy between two friends. "Just an argument that just escalated and escalated that had been going on for a couple of days, and it escalated to the point where something very tragic happened," he said. "Imagine two of your friends that you get along with on anything for anything and imagine them two getting into a really bad argument."

His sister went on to describe how wonderful her brother was. "My brother did not deserve that," she said. "He was a very good person, a very good friend, a very good partner, a very good brother. He cared a lot about everyone, and I just can’t believe it."

Ferrer’s girlfriend was on the scene, Friday morning, where she was visibly pregnant and in disbelief. Family members said she is due to give birth to a baby girl next month, and Francois was jealous.

The Broward Sheriff’s Office is investigating the incident as a homicide.