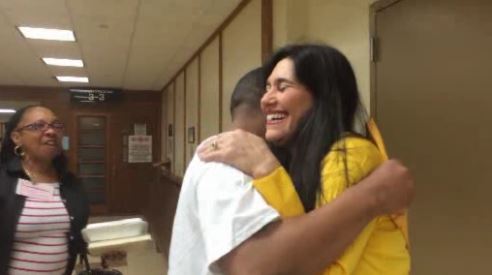 MIAMI (WSVN) — It’s not every day a judge has a touching reunion with a convicted criminal, but on Tuesday, one South Florida judge had just that.

On Tuesday, cell phone video captured the moment Arthur Booth was released from jail into an intervention program. Judge Mindy Glazer gave him a hug and told him she didn’t want to see him in court again.

Booth appeared in judge Glazer’s courtroom last year after a burglary arrest. She recognized him as a former classmate from Nautilus Middle School.

Booth recognized her, too, and got emotional.

At today’s reunion, he pledged he would change his life.