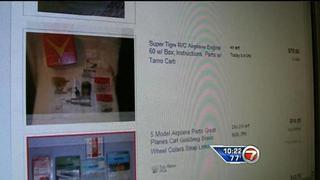 WSVN — People have all kinds of hobbies, some wanna play tennis some like working in the yard or sitting on the couch watching TV, and a few people like re-building airplanes?

Celso Pizano: "This is an airplane that I purchased back in Nov. 18."

Celso Pizano has the 1946 luscombe sitting in his backyard.

Celso Pizano: "And with it a lot of extra parts came and consequently there were also parts missing. So I've been buying those parts to finish off the airplane as well as selling parts that came with the entire package."

To buy and sell the parts for his uncommon hobby Celso went the common way Ebay.

Celso Pizano: "The money helps I use it to buy other things I want to finish up that airplane."

Celso has found buyers for the plane parts. What he is having trouble receiving is the buyers money.

Celso Pizano: "PayPal has adopted this practice of withholding or not making the funds available to me after the payer pays even after the items has been shipped."

Ebay owns PayPal, which is what people use to pay for the transactions on the website Celso says he has been using Ebay for about 10 years.

Celso Pizano: "My feedback, they are all positive. I have a hundred percent rating."

But now his plane to rebuild the plane are being disrupted.

Celso contacted PayPal and was given several reasons why they hold up deliveries of money. Celso says he didn't fall into any of those categories.

Celso Pizano: "I am entitled to an answer it's my money and I have not gotten a straight answer from them."

Celso says further confusing him the funds from some sales are held up. From others, the money comes right away.

Celso Pizano: "And there is no consistency there is no logic or reason for it, and it's not associated with the amount. I can't figure it out."

He can't figure it out and cant get the cash for his Ebay sales right away so Howard is this legal on the web.

Howard Finkelstein: "Yes its legal and its necessary to protect the honest customers from the dishonest crooks. If you agree to use PayPal, you have to abide by their rules, which block a seller from their getting their money for 21 days until they have proven that they are legitimate."

After a little digging it turns out, while Celso has plenty of sales some are international, and PayPal requires 25 domestic sales to life the restrictions so he can get his money quickly Celso was just short of that.

We then contacted a spokesperson for PayPal who was quick and helpful. After reviewing Celso's sales records with Celso's 100 percent rating. PayPal lifted the restrictions on his account. The money from his sales will now be available immediately.

Howard Finkelstein: "If you sign up for any kind of service on the Internet they will usually require you to click that, you accept their terms as most of know, those terms can be lengthy and few people read them. But those terms are the terms you have to live by of course if you don't like it, click the cancel button and go to another site."

With his PayPal problem cleared up Celso can now focus getting this plane off the ground.

Celso Pizano: "It has been in storage for over 20 years each time so it hasn't flown like most of the airplanes of that era. Hopefully, I will have it flying soon."

Patrick Fraser: "Putting a plane back together … nice. Did I mention Celso is a mechanical engineer anyway. If you sell on the Internet you don't have to use PayPal, but since its designed to protect the buyer and the seller, many people want to go that route to make sure the deal goes smoothly and both sides get what they want."

Troubles left you grounded? Ready to take flight and soar. Email us, we cant pay you pal, but we will help you e-vade any troubles.