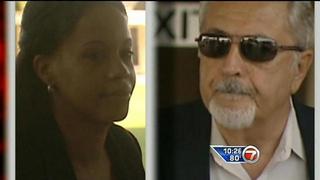 WSVN — Forty-three-year-old Dr. Cynthia Cadet appeared confident as she entered the federal courthouse in Palm Beach for the beginning of her trial. She is accused in the deaths of seven people.

Carmel Cafiero: “Good morning, Dr. Cadet. What are your thoughts as your trial is getting ready to get started today?”

Attorney: “The doctor has no comment this morning. Thank you.”

Seventy-four-year-old Dr. Joseph Castronuovo is accused in the deaths of two patients.

Thomas Sclafani, Dr. Castronuovo’s attorney: “Well, he didn’t do it. He was acting as a physician. And the problem is, the government is trying to criminalize matters which, if anything, may be a civil matter or an administrative matter.”

Both worked for twins Jeff and Christopher George, who are expected to testify against the doctors.

The brothers took the pain clinic business from small storefronts to a facility the size of a department store in Palm Beach County. Their clinics drew addicts and dealers from across the country.

7News was the first to expose the epidemic, and caught addicts shooting up and snorting pain pills in parking lots. They also carried away pills to be sold on the streets here. And in their home states.

The pill mills made so much money — an estimated $40 million — it was stored in garbage bags. At the time, Christopher George denied it all.

Carmel Cafiero: “We have pictures of people snorting, shooting up in your parking lot after coming out of your clinic. What do you have to say about that?”

But today he’s serving a 17-and-a-half-year prison term. Brother Jeff is doing 15 and a half years. Several who worked for the brothers cut plea deals, but doctors Castronuovo and Cadet refused, insisting they did no wrong.

Federal authorities carried evidence by the box load into court. According to the indictment, Dr. Cadet ordered and/or received 876,200 doses of oxycodone during a 2-year period and dispensed oxycodone “outside the scope of professional practice and not for a legitimate medical purpose.”

Dr. Castronuovo is accused of the same practice and, according to the indictment, he “ordered and or received 388,600 doses of oxycodone in a period of little more than a year.” If convicted, they could face life in prison and millions in fines.

Carmel Cafiero: “What about the testimony of the George brothers?”

Thomas Sclafani: “They’re in jail for 18 years. What else do you think they’re gonna say?”

Carmel Cafiero: “So in other words, you’re going to attack their credibility.”

Carmel Cafiero: “The trial is expected to last six to eight weeks, with consequences for the doctors that could last a lifetime. Carmel Cafiero, 7News.”

If there’s something you think Carmel should investigate, send an e-mail to clue@wsvn.com.