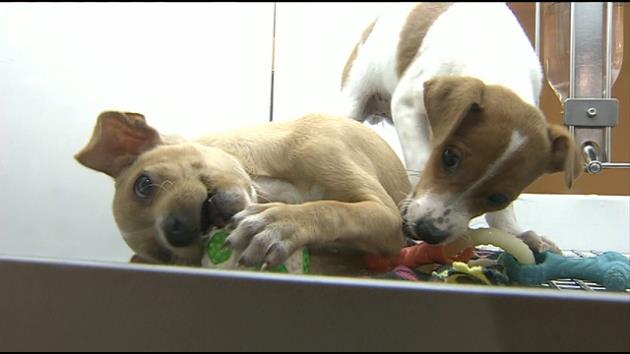 WSVN — A battle between business owners and animal activists. Some South Florida cities are banning the retail sale of dogs in an effort to eliminate puppy mills. But the bans have some unintended consequences. Carmel Cafiero has both sides of this "Dog Fight."

This poor puppy struggled to stand. This one was matted and muddy. And a third — shook — trying to open its eyes.

The Humane Society of the United States says they were among nearly 300 dogs rescued at a suspected Arkansas puppy mill busted in March.

Michele Lazarow: "You’re dealing in an industry that is stepped in consumer deception and animal cruelty."

Michele Lazarow is a Hallandale Beach City Commissioner and owner of three rescue dogs. In 2012, she led an effort in her city to ban the sale of commercially-bred dogs and cats in pet stores.

And since then, she’s been on a dogged crusade to convince elected officials in other cities to do the same.

Michele Lazarow: "I only have one vote, and it’s in Hallandale. Those commissioners who voted to do that, looked at the industry, heard people that bought sick dogs, saw the cruelty in the commerce, dogs are not products, they shouldn’t be sold."

As a result… one pet store owner says he had no choice but to close his doors earlier this month.

Mayid Yamin owned this Petland franchise. He says he had to shut down because 75 percent of his business was puppy sales.

Mayid Yamin: "It’s a burden. I have three kids, I have my wife. That’s my family, but you know what, I’m also concerned about the 30 employees that I have."

Francielle Dias was the kennel manager.

Francielle Dias: "I lost my job, you know, and now I start looking for something to do. Now, find a new job, start everything again… it will be hard."

Yamin even took out a full page newspaper ad to blast the city commission for listening to what he calls a "radical outside group" of animal activists led by Lazarow.

Lazarow says lax federal regulation has forced cities to take their own action.

By not allowing pet stores to sell puppies — she hopes there’s one less place for inhumane breeders to sell their dogs.

That argument, convinced some in Deerfield Beach.

But not all agree.

Mayor Jean Robb: "Now, nobody wants a puppy mill. But there are ways that things can be corrected… and we didn’t do it."

Yamin says the dogs in his store — did not come from Puppy Mills.

Critics of the bans say — they will not put a stop to bad breeders — and consumers who want cute little puppies will still find a way to get them. Some are just a click away.

Mayid Yamin: "We are against puppy mills too. We are fighting the same fight that they are supposedly after, but closing us down is not the solution."

Meanwhile, the front line in the puppy store war… Has headed to hollywood.. where commissioners are considering a ban. So the dog fight… continues. Carmel Cafiero, 7News.

Recently, Broward County also considered a ban, but shelved it for now. One commissioner floated a compromise that called for increased regulation instead. The link for that and the Deerfield Beach ordinance is below.