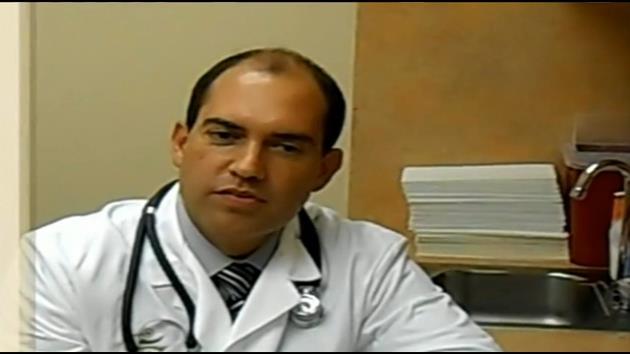 Forty-five-year-old Dr. Manuel Abreu has filed for bankruptcy. He has gone from earning around a $250,000 a year to being unemployed. His troubles started when women began to come forward and accuse him of inappropriately touching them.

Dawn Basham: “But the next thing I know, his hands are moving from wiping my knee to wiping my upper thigh, up my butt and then up my crotch over my underwear.”

Dawn Basham was the first to file a lawsuit against the doctor. Today, six more women have also filed legal actions. They are former patients, a medical assistant and a pharmaceutical rep all claiming Dr. Abreu violated them. The cases come from Delray Beach, Clearwater, and St. Petersburg — all locations where Dr. Abreu worked in medical offices.

Plaintiff: “And he came in by himself. He didn’t have an assistant with him or anything.”

This woman filed the most recent lawsuit. She did not want her face shown, but says a thyroid exam took a strange turn.

Plaintiff: “The right breast he touched and then the left breast. He went into

Carmel Cafiero: “So what did the breast exam have to do with the thyroid condition?”

Carmel Cafiero: “Did you say something to him?”

Plaintiff: “No. I was just kind of confused and I knew that it was creepy.”

I tried to talk with the doctor about all this.

Carmel Cafiero: “I’d like to talk with you for a minute about claims that women have made against you for inappropriately touching them.”

But Dr. Abreu wasn’t talking at all. The fact that he has filed for bankruptcy could have a major impact on the pending lawsuits.

Adam Horowitz: “Potentially, if it’s determined that he doesn’t have assets, he can get a discharge from the bankruptcy and have no civil responsibilities for these actions.”

Adam Horowitz represents the women who have filed claims against Dr. Abreu and his former employers.

Adam Horowitz: “Well, unfortunately, it means they won’t be able to get justice against him personally. They’ll still have the opportunity to proceed against his employers but they won’t get the type of justice they deserve.”

Meanwhile, some of the women also filed criminal complaints with police departments. Those complaints have been sent to the Palm Beach State Attorney’s Office for investigation.